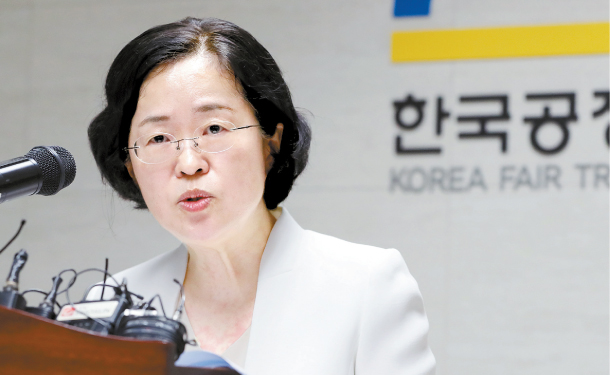 Joh Sung-wook, nominated to lead the Fair Trade Commission, holds a press briefing on Tuesday in Seoul to describe her policy ambitions. [YONHAP]

Joh Sung-wook, nominated to head Korea’s antitrust agency, said she would continue the work of her predecessor, Kim Sang-jo, who is now the Blue House policy secretary, and level the playing field between conglomerates and small companies.

In her first official press briefing since being nominated earlier this month, Joh said tougher regulations were needed for big companies that undermine the competitiveness of smaller partners.

“In the last two years since this administration has been in office, I believe the Fair Trade Commission (FTC) has made meaningful progress through consistent policies, realizing a ‘fair trade’ economy, ending gapjil [abuse of power] and promoting conglomerate reforms,” Joh said.

“I will continue the existing fair trade policy direction while injecting vitality into the market,” Joh said.

If Joh’s nomination goes through, she will be the first female to head the antitrust agency in its 38-year history.

The business community has not welcomed the nomination of the Seoul National University professor.

She has been dubbed the “avatar of Kim Sang-jo,” her predecessor, who earned the nickname “chaebol sniper” for his antipathy for large family-run businesses.

“I believe large companies [chaebol] have contributed a lot to our economic growth through outstanding management abilities,” Joh said. “But at the same time, founding family members continue to govern with small shareholdings and still have practices like giving too much work to affiliates, which are areas that need improvements.”

She stressed that the practice of conglomerates allocating too many of their contracts to affiliates deprive other small- and medium-sized enterprises of business opportunities.

“In the end, it is [also] a loss for conglomerates due to an inefficiency of allocation of resources,” Joh said. “I will focus on modifying the regulations against such practices by making them more effective,” Joh said. “In order to do so, we will establish a cooperative system of sharing information with related institutions such as the National Tax Services.”

She said conglomerates that have overcome crises are unlike those in the past that expanded recklessly.

“As such, there’s a need to change our focus depending on the changing environment,” Joh said.

When asked about worries that the FTC will simply target conglomerates, she said regulations will be equally imposed on big companies and small.

“The FTC is the judge in the game,” Joh said. “But the standards of assessment [on violations] could be different depending on the size [of the company],” Joh added.

She said while companies should not face disadvantages just because they are large, actions that cheat the market should not be tolerated.

“We will strictly execute the law on any violation regardless of a company’s size,” Joh said.

“We will not just investigate unfair practices by leading IT companies like Google, Apple and Naver but encourage improvements in the market structure,” Joh said. “We will approach issues with caution so that the excessive government intervention will not distort the market or hinder innovation.”

She said the FTC will regulate unfair practices in new businesses monopolizing a market by using big data or algorithms.

Joh, a business professor at Seoul National University, said she was the appropriate candidate to lead the antitrust agency because of her experience in imposing fair rules on the market.

“As an economist I have an overall understanding of the market economy. I can apply principals with consistency, which was demonstrated when serving on the Securities and Future Commission, and I promoted innovation, creativity and competition when serving on the Regulatory Reform Committee,” Joh said. “All of which are pertinent to the role of head of the FTC.”

While the date of Joh’s nomination hearing at the National Assembly has not been decided yet, Joh has been accused of violating the law regulating public servants because she served as an auditor for a waste-disposal company owned by her brother-in-law without pay.

Joh served in the position between September 2000 and March 2012, which overlapped her work as a professor at the state-owned Seoul National University. As a public servant, Joh was required to request an approval for having a side job from the school dean, which she did not.

Joh currently owns 2,400 shares in the company worth 12 million won.

Joh claims she didn’t know she needed the approval as it was an unpaid job.