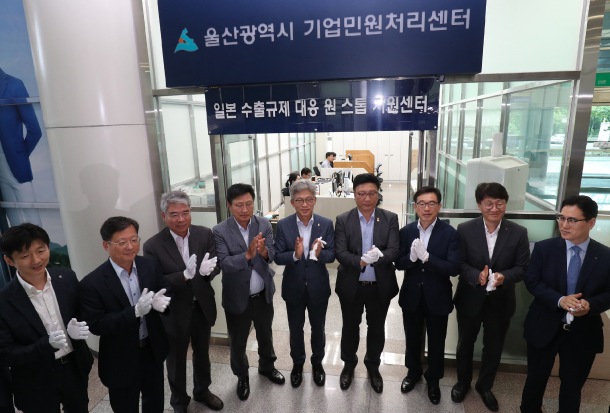 Song Byung-gi, vice mayor of Ulsan, third from left, and other city officials celebrate the opening of the city’s support center for local companies coping with Japan’s export restrictions at the Ulsan Economic Promotion Agency on Tuesday. [NEWS1]

The Korean government was busy Tuesday looking for ways to cushion the impact of Korea’s removal from Japan’s so-called white list of countries that receive preferential treatment on export processes, which officially goes into effect today.

Finance Minister Hong Nam-ki on Tuesday held a ministerial meeting in Seoul to go over measures that would counter Japan’s exclusion of Korea.

According to the Ministry of Economy and Finance, the discussions were mainly focused on materials, parts and equipment and how any changes could boost R&D investment and innovation strategy.

The government plans to announce details of the plan later today at a cabinet meeting chaired by Prime Minister Lee Nak-yon.

The government hopes to provide support to Korean companies dependent on import of materials and technologies from Japan starting with a 273.2 billion won ($225 million) fund that was included in a 5.83 trillion won supplementary budget approved by the National Assembly at the beginning of this month.

The ministers also reviewed the progress of the Ministry of Foreign Affairs’s outreach to other countries to win global support against Japan’s trade restrictions as well as a complaint about the restrictions to the World Trade Organization prepared by the Ministry of Trade, Industry and Energy.

Finance Minister Hong last week said the government is focused on minimizing the impact of the trade war with Japan because any kind of resolution has become more remote after Korea decided to pull out of an intelligence-sharing pact with Japan.

“There are no changes to our fundamental plan of minimizing the damages to companies as prepared by the government,” Hong said. “While we will work to try to resolve the issue as soon as possible, government departments will closely review measures in preparation for a long haul [dispute].”

“As Japan continues to remain steadfast in its previous position [of removing Korea from its white list], the problem could become extensive,” Choi said.

The FSC chairman said between Aug. 5 and Aug. 23, a total of 265.4 billion won in new lending or loan extensions had been given to companies directly impacted by the trade restrictions.

Most of the loans were to companies that directly import Japanese parts and materials.

Choi said so far the impact of the Japanese trade retaliation has been limited.

“In talking with banks, there were only few companies that have been affected by the export restriction [since July],” Choi said. “Some of the companies have requested finance so that they could stockpile the necessary materials and components [before the removal from the white list takes effect], and some were companies that were indirectly affected by the boycott of Japanese goods [by Koreans].”

Choi said many companies are worried about troubles that they may face in imports and exports.

“Recently, uncertainty in the global market is growing and so is volatility,” Choi said. “The Korean financial markets including the equity market and foreign exchange market are seeing more volatility.

“I hope [investors] will response cautiously and calmly,” Choi said.