Korea’s hikers risk breaking the law for a thrill: Backpackers who set up camp or cook at parks could be fined

Korea’s hikers risk breaking the law for a thrill: Backpackers who set up camp or cook at parks could be fined 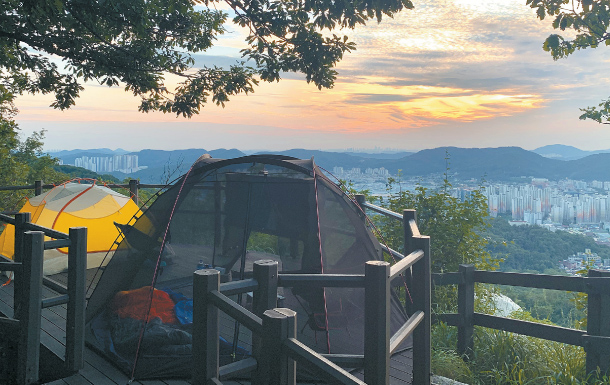 Earlier this month, backpackers set up tents at Mount Samseong, located across Gwanak, Geumcheon Districts in southern Seoul and Manan District of Anyang, Gyeonggi. They said they would retreat the next day before the sun came up. [KIM HONG-JUN]

Carrying everything they need in a single backpack, many Koreans have started to head out on multiple-day treks bringing them to mountains, beaches and everywhere in between. However, the activity - locally known as backpacking - walks a fine line between being legal and illegal.

Backpacking itself is not illegal, but sleeping and cooking outdoors is prohibited in almost all national, provincial and county parks in the country. Recreational forests and privately-owned campsites are some of the few places in Korea where backpackers are able to freely camp and cook their meals without breaking the law.

But because most backpackers hit the road in hopes of being close to nature, and recreational forests and privately-owned campsites are usually located at low-lying land. Instead, they head to mountains that guarantee better views at the risk of being charged.

Fines of up to one million won ($821) can be given to those who are caught cooking or spending the night in the parks, according to the Korea Forest Service. 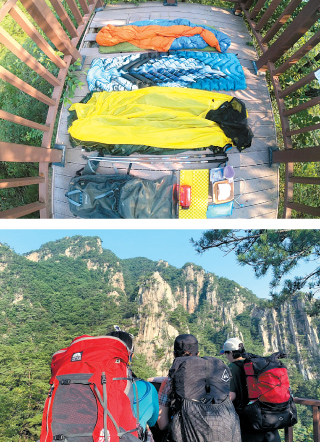 Top: Tools and equipment used for the backpacking spread out at Mount Unak in Pocheon, Gyeonggi. Above: Three backpackers, from left, Min Mi-jeong, Cho Myeong-ja and Choi Jin-seon, look at the cliffs of Mount Unak. [KIM HONG-JUN]

But many hikers do not hesitate to do so anyway. YouTube is flooded with clips of backpackers talking about their backpacking experiences, which, of course, include cooking their own meals and an overnight stay in the mountains.

“It seems like between one and two percent of the local hiking population enjoys backpacking,” said Kim Hye-yeon, who works for My Gear, a company that specializes in hiking tools and equipment.

Backpackers’ desire to find sites with picture-perfect views often clashes with existing laws that are designed to protect the nature.

On a scorching, 36-degree-Celsius (96.8 Fahrenheit) summer day earlier this month, the JoongAng Sunday, an affiliate of the Korea JoongAng Daily, hiked up to Mount Unak with three backpackers.

The mountain, located at Pocheon, Gyeonggi, stands 935 meters (3,067 feet) above sea level and is one of the few mountains that allows backpacking.

Of the three backpackers, Min Mi-jeong, said “Backpacking is not illegal at Mount Unak, but it’s hard to say it is 100 percent legal.”

Min soared to stardom on social media as an avid backpacker. She began uploading her backpacking adventures online in July 2016. She’s been traveling and backpacking over the past 17 months.

“I asked the local government [if I could cook and camp out at the mountain] and they begged me not to cook,” said Min.

Choi Jin-seon, 39, another backpacker, said, “Hundreds of people are probably illegally backpacking at this moment.”

Many backpackers set up tents in the less crowded areas of national parks when it is dark and they retreat when the sun goes up. With the current number of employees working for the Korea National Park Service (KNPS), it is hard to crack down on backpackers.

“We’re carefully monitoring some vulnerable areas but the parks are way too large. There is surely a limit in the number of places we can closely look at in the parks,” an official working at the KNPS said.

Cho Myeong-ja, 51, another of the three backpackers, said, “Some even go overseas for backpacking because they have no available options at home.”

Many people have been asking the KNPS and other related organizations to allow backpacking at national parks.

Backpacker Park Jong-young, 55, who visited Mount Samseong, located in southern Seoul and Manan District in Anyang, Gyeonggi, said, “People seem to go backpacking simply because they are [not allowed to do] it. Since there are a lot of backpackers already, I think this issue will be settled only if it is legalized,” he added.

Another backpacker who wanted to remain anonymous said, “If the key issue is the environmental impact [left by backpackers], I’m willing to [use a] potty pack just like backpackers do in other countries. I want the government to impose strong penalties for those who break the rules if they do allow backpacking.”

Some countries, such as the United States, Japan and Venezuela, allow backpacking with a catch. Backpackers must use portable toilet kits and hand in their excrement as proof that they handled their human waste with care and without ruining nature.

But the KNPS stays firm on the issue.

“It is already prohibited by law. There is no chance of reviewing it,” said Gang Byeong-seon, an official working at the environmental management division of KNPS.

Industry experts say there is little chance for backpacking to become legalized.

Jeong In-cheol, the secretary general of the National Park Conservation Network, said “The overall consciousness of national park visitors has improved a lot and we have seen dropping numbers in forbidden behaviors such as trespassing recently. But if backpacking is allowed, it is not fair to those who have been following the law.”

The KNPS keeps track of the number of illegal acts committed by national park users.

According to the KNPS, about 35 percent of park users walked through trails that were off-limit on average between 2016 and 2018. It was the most common law violation, followed by cooking and camping, but the numbers have fallen each year.

If the KNPS gives a green light to backpacking, it would bring up an issue of fairness, too.

Complaints for wider access to the national parks are piling up but certain requests can’t be met. When some laws are relaxed, others lose footing, said Jeong from the conservation network.

Experts have different takes on the issue.

Lee Hoon, a tourism professor at Hanyang University, said, “Backpacking is not taken care of by the Ministry of Environment and the KNPS because backpacking is immensely popular - it already went out of control.

“Backpacking is a global trend and [the government] can’t stop people from doing it,” he added.

Another industry insider said, “The government can’t let people go backpacking right away because it needs time to upgrade facilities, but it seems natural for me to let people do it [at national parks] by imposing deposits or maintenance fees on backpackers in the future.”

But Oh Choong-hyeon, a biological environmental science professor at Dongguk University, begs to differ. “No matter how hard they try to preserve the nature, the environment will be contaminated the moment the backpackers set foot in certain forests and valleys. And the number of backpackers will grow so quickly once it is allowed.”

Another industry insider said, “Koreans tend not to spend money when they interact with nature. I highly doubt that they are willing to pay deposits.”

With no clear answer to the pending issue, one experienced climber said, “Since the KNPS is currently encouraging people to go backpacking in recreational forests and at privately-owned campsites, people start backpacking there. They should eventually extend their discussion [with the government] as time goes by.”


Backpacking philosophy is alive and well

It is unknown when backpacking became a leisure activity, but one of the oldest known backpacks in the world, made of wood, cloth and leather, was found next to a man who was estimated to be alive between 3,400 and 3,100 B.C.

Some assume the beginning of backpacking as an outdoor activity started when Lloyd F. Nelson produced the very first backpack for camping use in 1920. Others think the origin of backpacking dates to 1951 when Dick Kelty made a backpack with a modern, wooden frame.

But wooden backpack frames have since been replaced with lighter and more durable materials such as aluminum and more features have been added to hiking backpacks, such as a padded waist and zippered compartments.

Hippie culture played a major role in popularizing backpacks, too. In the 1960s, there was a well-known walking path called Hippie Trail that was popular with hikers. After departing from locations in Western Europe such as Paris or Luxemburg, hikers could walk eastward and make stops in cities like Istanbul, Turkey; Teheran, Iran; Herat, Afghanistan and Peshawar, Pakistan. The trail came to an end in Delhi, India.

Of all the guidelines practiced by backpackers, the primary one is Leave No Trace, also known as LNT. Leave No Trace’s top priority is keeping nature as it is.

LNT was first introduced as a guideline of the U.S. Forest Service and National Outdoor Leadership School in 1991 to minimize the impact of travelers on the environment and has been adopted by a majority of backpackers since then.

Korean backpacker Min Mi-jeong said, “LNT is the most basic and compulsory rule. It is intentionally basic so people will find it hard to forget.”