Soon even your car will have its own electric scooter

Soon even your car will have its own electric scooter 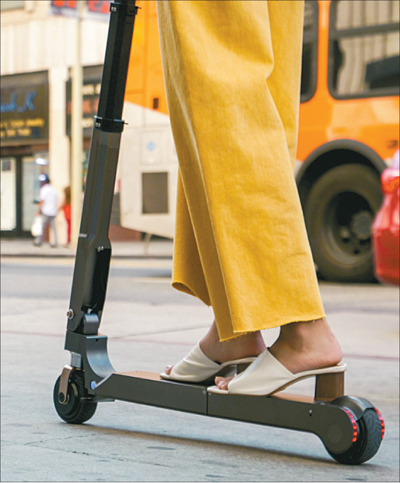 A model demonstrates the electric scooter to be mounted in Hyundai Motor and Kia Motors vehicles in the future. [HYUNDAI MOTOR]

Hyundai Motor Group on Tuesday unveiled an electric scooter that can be mounted inside a vehicle and charged with the electricity generated while driving.

The product is an upgrade to a concept model Hyundai Motor first introduced in 2017.

The group said it is considering including electric scooters as an upgrade option in newly launched cars from Hyundai Motor and Kia Motors from 2021 so drivers can conveniently continue to their destination after parking their car.

The scooter, according to Hyundai, will be charged automatically when mounted in a dedicated space in the vehicle through electricity generated from driving. When drivers reach parking lots, they can take out the scooter and continue on to their final destination.

The scooter unveiled Tuesday is powered by a 10.5 ampere-hour lithium-ion battery, which enables the scooter to travel roughly 20 kilometers (12.43 miles) per charge. Its maximum speed will be limited to 20 kilometers per hour, the automaker said. The scooter can be folded three times, making it small enough to carry around. It weighs 7.7 kilograms (17 pounds), which Hyundai says is the lightest among scooters in a similar segment.

The final spec and design of the product when launched, however, can be changed, according to Hyundai.

The latest development shows that Hyundai Motor and Kia Motors hope to become total mobility service providers in the future rather than being traditional automakers, the automakers said in statement Tuesday.

“There have been many companies that make electric scooters, but this is the first time an automaker developed an electric scooter connected with cars,” said a spokesperson from Hyundai Motor and Kia Motors’ robotics team in charge of developing the scooter. “It will be a solution that will support customers’ travel from the beginning to the very end in the future.”