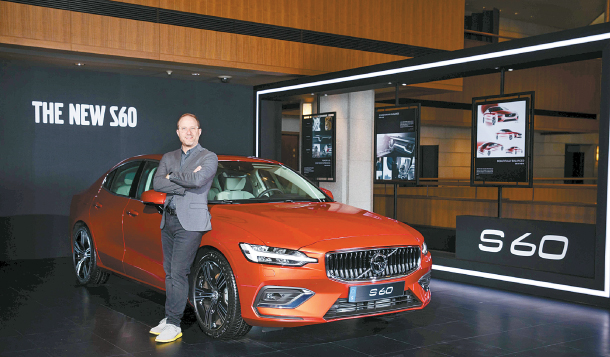 T. Jon Mayer, head of design at Volvo Cars USA, poses for a photo with the latest S60 during a press briefing held Tuesday in Seoul. [VOLVO CARS KOREA]

Volvo Cars Korea launched a completely overhauled version of its S60 sedan, fully changed for the first time in eight years, on Tuesday.

The company hopes to sell more than 10,000 cars in the country this year, boosted by sales of the newly launched sedan, Volvo Cars Korea CEO Lee Yun-mo said during a press briefing in Seoul Tuesday.

Lee said the company is expecting to have sold some 6,975 cars by the end of this month and, with the favorable market response towards the S60, there will be no problem reaching the 10,000 sales target for the year.

“Already, 1,717 S60s have been preordered as of now [since July 1],” Lee said. “It is double the highest preorder record set by our previous models.”

“[Reflecting the trend,] Volvo has made a very aggressive pricing strategy for the S60 in the Korean market,” Lee said.

The S60 is priced between 47.6 million won ($39,216) and 53.6 million won. Compared to the pricing in the United States, it is roughly 10 million won cheaper to buy the highest spec model in Korea, Lee said.

Volvo said the S60 targets young customers looking for a dynamic driving experience as well as the comfort and safety of Scandinavian design.

The third-generation S60, launched Tuesday, is roughly 125 millimeters (5 inches) longer in length and 96 millimeters longer in wheelbase compared to the previous generation, but is shorter in height and width.

T. Jon Mayer, head of design at Volvo Cars USA who led the design for the S60 sedan, said the car was “longer, lower and wider-looking than the predecessor” to make it look “much more planted to the road.”

These proportions give the car an efficient and agile look, Mayer said, comparing the look of the car to a lightweight runner with refined muscles poised to start moving.

Mayer also emphasized that the sedan is the most “driver-oriented car we [have] made to date,” highlighting it as a core competitive edge compared to its rivals such as the Mercedes-Benz C-Class and BMW 3-Series.

The designer said the car’s interior, in particular, offers Scandinavian warmth through the use of color and materials close to nature and a reduction in the amount of buttons.

“When you sit in the vehicle you feel calm and embraced,” he said.

The car currently only comes in a gasoline model, but Volvo’s Sales and Marketing Director Lee Man-shik said that future releases of the S60 may come with eco-friendly engine options including plug-in hybrid.

When asked whether supply of S60s will be able to meet demand, CEO Lee said he is expecting to deliver some 1,000 units this year after starting deliveries around mid-September.