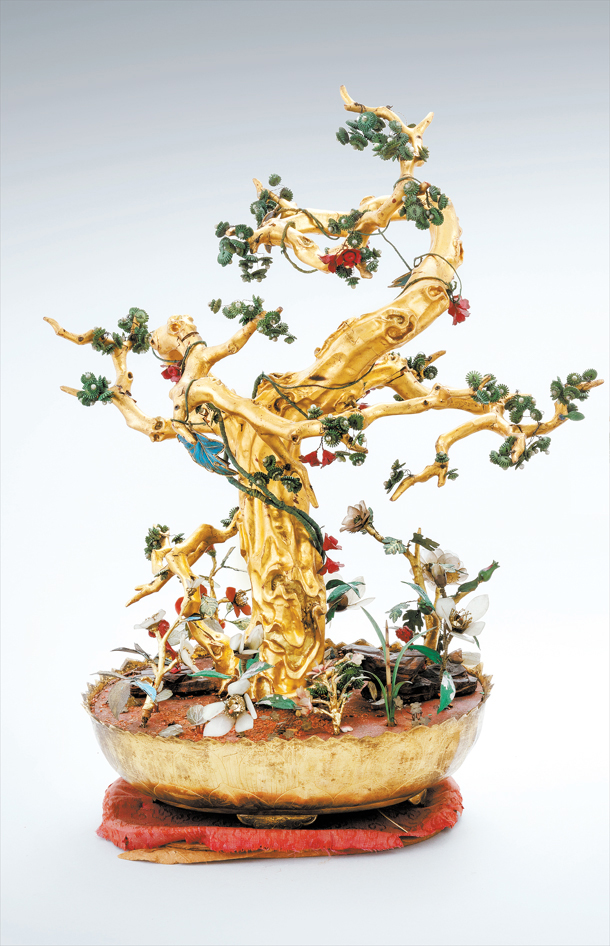 A royal ornament known as banhwa, above, is part of the Guimet National Museum of Asian Arts’ Korean collection. It is said to have been gifted to Sadi Carnot, then-president of France by Korea’s Emperor Gojong (1852-1919). [THE OVERSEAS KOREAN CULTURAL HERITAGE FOUNDATION]


FORGOTTEN TREASURES
Part 2: Keeping up with the artifacts

However, they can also become artifacts of diplomacy. Countries that have had their cultural artifacts illegally removed through looting or during armed conflict or colonial rule have been fostering new relationships with other countries to facilitate the return of cultural properties to their country of origin. Insiders often talk about the homecoming of the Holy Crown of St. Stephen as an example. The crown was a gift from Pope Sylvester II to Stephen I of Hungary upon his coronation on Dec. 25, 1000. But when World War II broke out, the crown was taken to the United States to protect it from the theft. However, when Hungary fell into Soviet orbit, the United States suspended its planned return of the crown. Its restitution remained a pressing issue in the diplomatic relations between the two countries for many years. Ultimately, a breakthrough was made during former U.S. president Jimmy Carter’s term as he decided to return this profound symbol of Hungary’s nationhood. Through this, the United States was able to initiate a diplomatic relationship with the then-communist state, a first for the United States.

Korea too has been building and maintaining good diplomatic relations with countries that possess Korean cultural properties. In 1987, 93 royal objects were voluntarily returned from the Smithsonian National Museum of Natural History in the United States including royal seals, scrolls and jade books used during the final years of the Joseon Dynasty (1392-1910) by Emperor Gojong and Sunjong and Empress Myeongseong. According to reports, the artifacts were purchased for $25 during the Korean War by an American who believed they were merely antiques rather than royal treasures. In 1982, when the U.S. museum organized various events to celebrate the 100th anniversary of diplomatic relations with South Korea, the American is said to have brought the objects to the Smithsonian National Museum of Natural History for appraisal. Chang-su Cho Houchins, who was a curator at the Smithsonian until she passed away in 2009, noticed the historical significance of the objects and got in touch with the owner. After realizing that the purchase he made was immoral, the owner decided to hand over the objects to the museum at a price of $7,500. Since the funds that the museum provide were not enough to pay the price, Houchins collected money through fundraising efforts and managed to purchase the royal artifacts by paying the U.S. owner $1 million, much more than what he had asked for as a sign of appreciation. 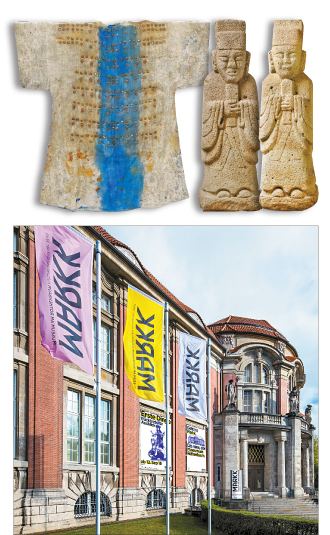 Top left: Leather armor from the Joseon Dynasty (1392-1910) were returned to Korea from Germany’s Mission Museum of the St. Ottilien Archabbey in May 2018. Top right: Two Joseon Dynasty grave-guarding statues were returned by the Rothenbaum World Cultural Museum in March. Above: Museum am Rothenbaum Kulturen und Kunste der Welt, or the Rothenbaum World Cultural Museum (Markk), is located in Hamburg, Germany. [YONHAP, MARKK]

Last year, leather armor from the Joseon Dynasty was also voluntarily returned to Korea from the Mission Museum of the St. Ottilien Archabbey in Germany. Understanding its rarity, the museum decided to return it to Korea. According to the Overseas Korean Cultural Heritage Foundation and affiliate of the Cultural Heritage Administration, Wolfgang Oxler, the head of the monastery, and Theophil Gaus, director of the museum, happily handed it over saying that they hope the armor contributes to the research about armor in the Joseon Dynasty. It is unknown how the armor traveled from Korea to Germany, but the foundation believes that a missionary in Korea in the 20th century brought it with him or her when returning to Germany.

The armor wasn’t the first item the museum had returned. In 2005, it donated a set of paintings by Joseon Dynasty artist Jeong Seon, a collection of botanical specimens from Korea taken between 1909 and 1928 in 2014 and a record of a family register in the Jeolla region in the 17th century in 2016.

More recently, another museum in Germany voluntarily returned a set of Joseon Dynasty artifacts, allowing the two countries to establish friendship and trust. The returned items were two stone grave-guarding statues that became a collection of the Museum am Rothenbaum Kulturen und Kunste der Welt, or the Rothenbaum World Cultural Museum (Markk) since 1987. After realizing its illegal acquisition, the museum returned the statues in March.

“The voluntary decision to restitute foreign cultural properties is an exemplary case that other countries can also follow,” said Kim Hong-don, secretary general of the foundation.

Barbara Plankensteiner, director of the Markk also said in a statement that the museum is “pleased that we have been able to clarify this case and that Korea will receive the two valuable works back,” adding that “this is another important step that strengthens and continues the longstanding cooperation of our museum with our Korean colleagues.”

As for the cultural objects that went to foreign countries as gifts or those that can’t come back immediately, the Korean government has been making efforts to make sure they are well-preserved. 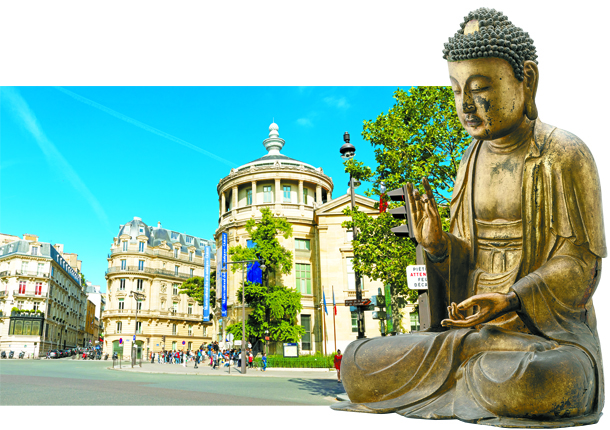 Hundreds of cultural artifacts including banhwa and the Statue of Seated Wooden Buddha, right, that are in collection at the Guimet Museum, left, were studied by Korean researchers as part of the Overseas Korean Cultural Heritage Foundation’s project to preserve, repair and utilize Korean cultural artifacts that are outside the country. [THE OVERSEAS KOREAN CULTURAL HERITAGE FOUNDATION]

“We deploy Korean experts to overseas museums that possess the Korean properties so that the objects are professionally maintained,” said an official from the Cultural Heritage Administration. “The experts also make sure the artifacts are given the spotlight and not kept in museum storage all the time.”

The foundation has conducted research into Korean cultural properties stored in various parts of the world since 2013. So far, about 37,000 objects have been studied at 47 institutions in 12 countries, according to the foundation.

The latest research was conducted between June 24 and July 19 at the Guimet National Museum of Asian Arts and the Cernuschi Museum’s Museum of the Asian Arts in Paris. According to the foundation, Korean experts went to the Guimet Museum and inspected the Korean artifacts stored there 20 years ago upon request made by curator Pierre Cambon, who is responsible for Korean heritage items at the museum. This summer’s research was the first time it has been inspected since.

After conducting research, Korean officials update the list of the cultural properties, report what kind of items need repair and suggest how to utilize them in different exhibitions. During the recent research trip, officials learned for the first time of the existence of a crystal rosary wrapped in a textile inside the Seated Wooden Buddha’s head, which was created in the 15th century Joseon Dynasty. The statue is currently on display in the museum’s special exhibit titled “Bouddha, la legend doree,” which kicked off on June 19 and runs until Nov. 4.

Another Korean cultural artifact in possession of the Guimet Museum is a royal ornament known as banhwa. Since banhwa no longer exists in Korea, the artifact is an important cultural property that helps people better learn about life inside the royal court at the time. Emperor Gojong gave the banhwa as a gift to Sadi Carnot, the president of France between 1887-94. The ornament was then handed down to one of three sons of Carnot, and it was donated to the museum by the son, whose name isn’t recorded.

There are not as many Korean cultural artifacts stored in the Cernuschi Museum as there are in the Guimet, but there are about 200 objects including some modern Korean paintings, according to the foundation. According to Dongguk University Korean Art History Professor Choi Eung-cheon, one of the most significant Korean items at the Cernuischi Museum is a Copper Bell created in 1311. According to the foundation, among the three prestigious 14th century copper bells, this bell is the oldest.

To continue the good relationship between them, the foundation signed a memorandum of understanding with the two museums and decided to continue the research and collaborate on maintaining and utilizing the Korean cultural artifacts.

The Overseas Korean Cultural Heritage Foundation announced Monday that it will support a conservation and preservation project for 36 Korea cultural artifacts that are currently stored at The Dayton Art Institute in Dayton, Ohio, including a 2-meter-long (6.6-feet-long) royal folding screen that depicts the sea, cranes and peaches, known as haehakbandodo. This folding screen, which has a background embroidered in gold, is from the early 20th century. It is considered very rare, however, as it is badly damaged, the artifact has rarely been displayed. According to the foundation, a U.S. businessman named Charles Goodrich purchased it in the 1920s and was donated to the Dayton Art Institute by his niece Mary Patterson in 1941.

“We’ll make sure this rare folding screen gets repaired properly so that it can be exhibited both in Korea and the U.S.,” said an official from the foundation.

Twelve paintings - the cultural artifacts that came back to Korea for repairs, will be exhibited from Sept. 11 at the National Palace Museum of Korea in central Seoul before flying back, as the repairs have been completed. The special exhibition will run until Oct. 13.