Korea looks for a win at FIBA World Cup

Korea looks for a win at FIBA World Cup

Having finished their last tune-up match with a win against Angola on Tuesday, the Korean men’s basketball team now heads to China to compete at the International Basketball Federation (FIBA) Basketball World Cup. 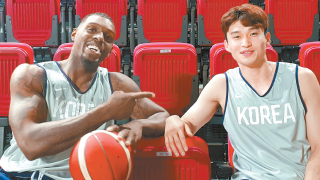 Ra Gun-a and Lee Dae-sung pose for a photo at Samsan World Gymnasium in Incheon on Aug. 22. [KANG JUNG-HYUN]

Established in 1950, the FIBA Basketball World Cup was called the FIBA World Championship until 2014.

As this is FIBA’s biggest event, a number of NBA players will head to the tournament in China to represent their countries. The United States, which is seeking its third straight win, will be missing star player Stephen Curry of the Golden States Warriors, but will have Kemba Walker of the Boston Celtics and Khris Middleton of the Milwaukee Bucks on the court.

A total of 32 countries will be divided into eight groups of four to start the tournament. Only the top two teams from each group will advance to the second round, while the third and fourth ranked teams advance to the classification round.

Korea’s all-time best finish at the World Cup was 11th during the 1970 event, but those halcyon days are long gone. The Korean squad hasn’t won a single game at the tournament since 1994 - the two times it’s qualified since then, in 1998 and 2014, the team has lost all five of its matches.

As a result, this year’s team can dramatically improve on the last 25 years of Korean basketball by picking up just one win.

Before the World Cup, Korea played tune-up games against No. 6 Lithuania, No. 24 Czech Republic and No. 39 Angola. Korea lost to Lithuania and the Czech Republic, but finished strong by defeating Angola 91-76. All three opposing teams have qualified for the World Cup.

Although Korea faces tough competition in China, the team is hoping that this year will herald a change in its fortunes with the addition of Ra Gun-a and Lee Dae-sung, both of the Ulsan Hyundai Mobis Phoebus.

Ra is an American-born naturalized Korean. After triumphantly finishing his most recent season with the Phoebus, Ra has had no time to go back to the United States to visit friends and family, as he immediately joined the Korean national team. Although basketball falls behind baseball and football in terms of popularity in Korea, Ra’s performance on the court is already making him a household name here.

Along with Ra, Lee is another player expected to lead the national team. Before Lee made his KBL debut, he attempted to play in the United States. He first played for Brigham Young University (BYU)-Hawaii, and briefly played for the Erie BayHawks of the NBA G League, the NBA’s minor league.

To prepare for the World Cup, the players have been analyzing each team by watching clips. Based on their study, Lee said, “the height of the point guard from Argentina is over 1.90 meters [6 foot 2]. Russia has great height and plays tough. Even Nigeria, who we hope to pick up a win from, has good physique and skills.”

To win against these tough opponents, Korea is currently working on motion offense, which encourages players to improve teamwork and focus on passing.

“Head coach Kim Sang-sik showed us clips of Team Philippines playing against a European team,” Lee said. “Despite the physical inferiority, the five players didn’t give up and they worked as one. They also played aggressively.”

In addition to playing well at the World Cup, Lee and Ra also believe that a good performance at the tournament will help bring back the basketball fans in Korea.

“It is true that the popularity of basketball decreased compared to the past,” Lee said. “I hope this year’s World Cup can be an opportunity to regain the popularity of the sport. I couldn’t compete at the World Cup five years ago due to an injury. Even if we’re playing against NBA players, I promise that I won’t get intimidated. We won’t lose easily. Also, if I get a chance, I’ll try dunk shots.”

Ra agreed with Lee as he also said that the team will play with confidence, even if they play against the United States.