At the beginning of the season, Park Byung-ho of the Kiwoom Heroes didn’t look like he had a shot at winning the home run title this year. 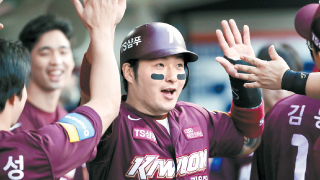 Park Byung-ho of the Kiwoom Heroes celebrates in the dugout after hitting a home run during a game against the Hanwha Eagles on Tuesday. [YONHAP]

That was before he put away four homers in a single game on Tuesday to emerge as the new leader in the KBO’s home run race.

During a game against the Hanwha Eagles at Cheongju Baseball Stadium in North Chungcheong on Tuesday, Park got off to a great start by hitting a two-run home run at the top of the first inning over the right fence, off Eagles’ starter Song Chang-sik’s changeup. Then, at the top of the third, Park hit another, this time over the left fence from Song’s slider.

But that was only the beginning. Park and Song clashed again at the top of the fifth inning, with the former major leaguer knocking his third ball over the fence for the day, a fastball sent far beyond center field.

Hanwha got a brief respite in the eighth inning as Park was walked, but he got another chance in the ninth inning when he sent Lee Chung-ho’s fastball a huge 125 meters (410 feet) outside of the park. The Heroes won the game 15:0.

With four home runs, Park is now the leader in the KBO’s home run race for this season at 28, two ahead of his teammate Jerry Sands.

Choi Jeong of the SK Wyverns is third with 24 home runs, followed by Jamie Romak, also of the Wyverns, with 23.

Surprisingly, this isn’t the first time Park has hit four home runs in a single game. Back in 2014, Park also managed to get the quadruple homer while playing for the Heroes in a game against the NC Dinos.

Aside from Park, four other players - Park Kyung-oan, formerly of the Hyundai Unicorns, Wilin Rosario, formerly of the Hanwha Eagles and Choi and Han Dong-min of the SK Wyverns - have hit four home runs in a single game. Park is the only player to have ever done it twice.

As Park is the new leader in the KBO’s home runs, he has a shot at tying another record. If Park wins the home run title this season, it will be the fifth time he has done so, following wins in 2012, 2013, 2014 and 2015. Only Lee Seung-yuop, formerly of the Samsung Lions, has ever managed to win the title five times.

Park’s performance is especially impressive as he didn’t have the best start to the season. During the first three months, Park hit just 13 home runs. Although that is not a bad number, considering his slugging ability, it was a disappointing result.

Even worse, he was excluded from the entry in June, hitting only three home runs for the month. As Park’s been suffering with a wrist injury all season long, he only added two more home runs throughout July.