Jung Hae-in heads back to the 90s for ‘Tune in for Love’: The actor embraces being labeled a romantic, as it has helped launch his career

Jung Hae-in heads back to the 90s for ‘Tune in for Love’: The actor embraces being labeled a romantic, as it has helped launch his career 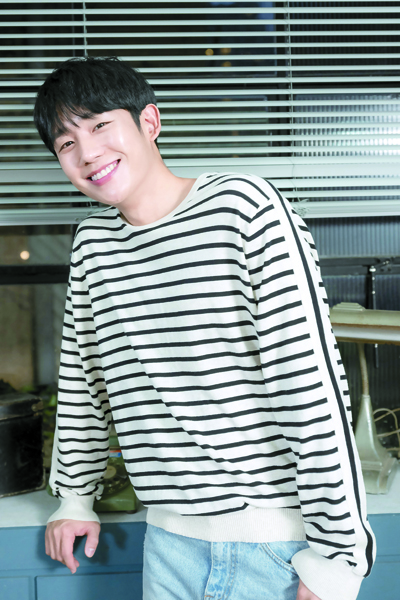 Actor Jung Hae-in may be seen as a romantic due to his successive portrayals of a sweet, handsome guy in two drama series and his latest film “Tune in for Love,” but Jung says he’s just thankful to be known at all.

“I couldn’t possibly imagine having the luxury of being able to choose a role just a few years ago,” he said during a recent interview with the Korea JoongAng Daily at a cafe in Samcheong-dong, central Seoul. “[When you’re a rookie actor] you just feel grateful to be part of any film [regardless of genre].”

The actor has been steadily building up his career since he debuted in the drama series “Bride of the Century” (2014) which aired on TV Chosun. He rose to stardom after two successive roles on the hit TV dramas, including JTBC’s “Something in the Rain” (2018) became a hit and MBC’s “One Spring Night” (2019).

According to Jung, one of the many reasons why he said yes to the film was his love for sentimental and analogue things. “I especially love listening to music from the 90s,” said Jung. “As I get older, I feel more comforted through the lyrics of the songs and I love the mellow melodies.”

“Tune in for Love,” featuring Jung and Kim Go-eun, is about a couple’s journey through love when singer Yoo Yeol was a popular D.J. host for the radio broadcast program “Yoo Yeol’s Music Album” from 1994 to 2007. The radio program also acts as a love bridge to unite lovers Mi-soo and Hyun-woo during a time when instant communication was impossible.

“Although I haven’t listened to the radio a lot, when I read the script, the background music for the film naturally floated through my head,” the actor said. He added that he has wanted to work with Kim ever since their brief encounter while filming the tvN drama series “Goblin” in 2017, in which Jung played Kim’s first love.

Moreover, Jung was touched by how director Jung Ji-woo approached him for the role. “When we first met, we didn’t really talk much about work,” Jung reminisced. “We just talked about life and personal stuff, but that’s when I decided I should take this role, because I felt that I was being respected as a person before I was an actor.” 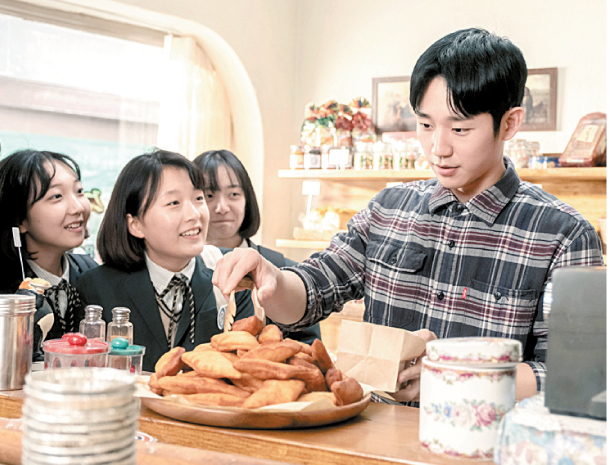 Scene from the film. Jung Hae-in portrays the character of Hyun-woo who tries to start fresh after a traumatic experience in school. He meets his first love, Mi-soo, by chance at a bakery store. [CGV ARTHOUSE]

Jung admitted that because of the setting, the film may not appeal to audiences in their teens and twenties. “But I think love and youth are two iconic themes that people will always have a soft spot for, regardless of age and generation,” Jung said. “I hope that the film can trigger memories about one’s first love for older audiences, and basically get people to rethink the concept of love even though some might not completely sympathize with the characters’ situations.”

“In a way, I think couples in the 90s could have been more affectionate for each other because they didn’t have cell phones, especially for long-distance couples who could only rely on letters and phone calls.”

Although the film is over two hours long, it does not rely on dialogue to tell the story of Mi-soo and Hyun-woo. Instead, it focuses on the actors’ expressions and situations and audiences will have to read their faces to know what is going on.

“It was hard at first, but so was every other film or drama I did,” Jung said. “But director Jung isn’t the type to tell me how to act one-on-one. Instead he would use metaphors and allusions as a reference. At first I thought it was too abstract, but as I played Hyun-woo more and more, I felt his explanations were more specific, because there isn’t a lot of dialogues in the film anyway. Even without the words, I learned to sympathize with Hyun-woo and his situation.”

Even though it wasn’t a part of his plan, Jung says that he isn’t that bothered by the media’s portrayal of him as a romantic.

“I didn’t plan on having success in three consecutive romantic roles, but I don’t mind [doing that],” said Jung. “I think I did what I’m supposed to do - take advantage of the chances offered to me. [Regardless of the genre,] I want take on any role that I can express properly at my age.”

But Jung hinted that he will be portraying an entirely different role in the upcoming film (tentatively titled) “Ignition,” scheduled to premiere next year. “The characters Hyun-woo and Sang-pil [the character I portray in the next film] are similar in a way that they both spend their adolescence full of defiance and vigor, believing that they can do anything they want. But the similarity ends there. Although I can’t spill the beans about the film yet, I promise that the public will see a different side of my acting.” Jung said.

When asked if he had any standards or criteria for selecting his role, Jung hesitantly replied “No.”

“[Rather than having a set of criteria,] I just go for it when I see that the people whom I will be working with are good people,” Jung said. “I’m just pleased to be thought of or offered any role for now. I think I will have a different answer after I’ve been in the business for 10 or 20 years.”