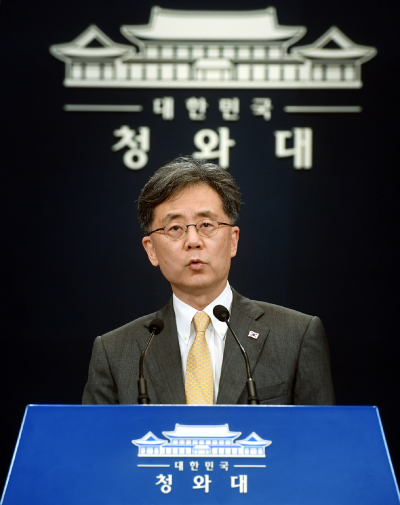 The Blue House expressed “strong regret” over Japan’s removal of Korea from its “white list” of trusted trading partners Wednesday but left open the possibility of salvaging a bilateral military intelligence-sharing pact if Tokyo reverses its restrictions.

Kim Hyun-chong, the Blue House deputy national security adviser, said in a briefing that Seoul’s General Security of Military Information Agreement (Gsomia) with Tokyo “could be reconsidered if the two sides could reach a solution in the ensuing period and if Japan withdraws the unwarranted measures.”

He added that “the ball is now in Japan’s court.”

In early July, Japan implemented regulations on the exports of three high-tech materials needed to make semiconductor chips and displays in Korea.

On Aug. 2, the Japanese cabinet decided to remove Korea from its white list of 27 countries given preferential treatment in exports, a measure that took effect Wednesday.

Korea, which has been on the white list since 2004, is now excluded from Japan’s Group A of countries and is categorized in Group B, subject to cumbersome export procedures.

Last week, Korea decided to terminate its bilateral Gsomia with Japan. The Gsomia, signed in November 2016, is renewed automatically each year unless either country provides a 90 days’ notice that it’s pulling out.

In spite of Tokyo’s protests, Kim pointed out that it was actually Japan that “linked security issues with export restriction measures in the first place.”

He noted that the purpose of the Gsomia is “to facilitate the exchange of sensitive military information between the two countries based on a very high level of mutual trust.”

But there is no “justification” for maintaining the Gsomia, he said, “now that basic trust has been undermined between the two countries, as Japan is claiming.”

Prime Minister Lee Nak-yon on Tuesday signaled that Korea could reconsider its decision to scrap the Gsomia, set to expire on Nov. 23, should Japan withdraw its white list removal decision.

During the press briefing at the Blue House Wednesday, Kim brushed off concerns about fissures in the Korea-U.S. alliance despite Washington expressing “disappointment” with Seoul’s decision to terminate the Gsomia.

He called it “a diplomatic expression that the United States uses publicly when there are policy differences with an ally or a partner.”

Kim pointed out that Japan “undermined the trilateral partnership by undertaking arbitrary and hostile economic retaliation against the Republic of Korea.” Washington favors trilateral security cooperation with its two allies in the region.

The Korean government’s position on the importance of the Korea-U.S. alliance as well as trilateral cooperation involving Japan remains “unchanged,” he said.

Kim noted that the Korea-U.S. alliance “will not be easily shaken by the Gsomia issue” and denied that the scrapping of the intel-sharing pact would cause any problems in the “ability to respond to security threats” in the region.

The Korean government, he said, will use this “as an opportunity to further upgrade the ROK-U.S. alliance by taking the initiative in strengthening our own capabilities.”

However, Kim criticized Japan for attempts at historical revisionism and meddling in another country’s judicial decision.

He noted that Japanese Prime Minister Shinzo Abe publicly commented twice that Korea “cannot be trusted” and “is treating us like an adversary.”

“It is actually Japan who is trying to rewrite history,” said Kim.

Japan maintains that a 1965 treaty normalizing bilateral relations with Korea, which provided an economic cooperation fund, settled all compensation matters.

Kim said that the Korean government “has never denied the 1965 Claims Agreement.”

But he added that the Korean government “has consistently maintained the position that the crimes against humanity,” in which the Japanese government and military were involved, “cannot be deemed as resolved” by the 1965 agreement, acknowledging that the “individual rights of the forced labor victims to claim reparations are very much alive.”

Despite Japan’s demands that Seoul “rectify” the Korean Supreme Court rulings, Kim emphasized the “independence of the judiciary and the separation of powers” as a democratic nation.

Referring to President Moon Jae-in’s Liberation Day speech on Aug. 15, Kim left open the option for dialogue and said, “we hope Japan will grasp the hand that we have reached out.”