For Z-Girls and Z-Boys, a world of opportunities

For Z-Girls and Z-Boys, a world of opportunities 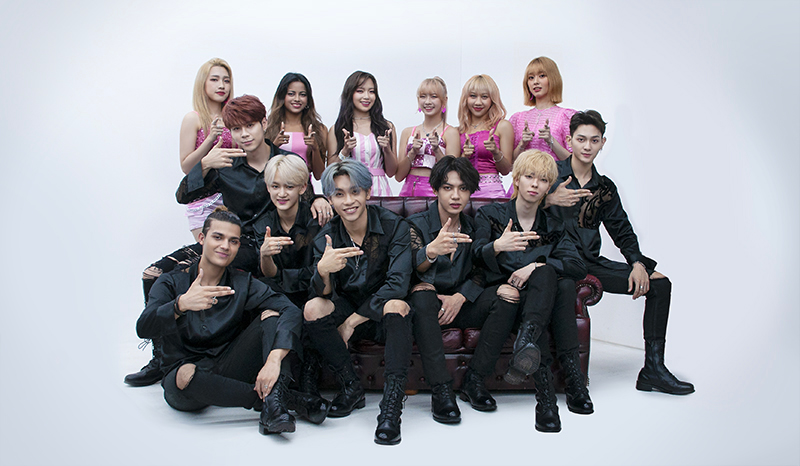 From top left, Queen, Priyanka, Carlyn, Bell, Vanya and Joanne of Z-Girls and Sid, from bottom left, Perry, Blink, Mavin, Josh, Gai and Roy pose for a photo during an interview with the Korea JoongAng Daily on Aug. 23 at Zenith Media Contents’ office in southern Seoul. [JEON TAE-GYU]

Meet Z-Girls and Z-Boys, two groups made up entirely of non-Koreans performing in the style of K-pop.

Although their songs are in English, the two groups’ glittery make-up, synchronized choreography and flashy outfits look no different from any other K-pop group. In fact, the groups are trained and styled by Koreans and managed by Korean company Zenith Media Contents, which has nurtured other K-pop acts like Wanna.B and Zest.

Diversity is what really sets Z-Girls and Z-Boys apart from other bands in the industry, and their fans, who also hail from all across the world, are loving it.

The members of the groups are part of “Generation Z,” or those born on or after 1995, and come from India, Indonesia, Japan, the Philippines, Taiwan, Thailand and Vietnam, which increase their appeal and ability to communicate with fans in those countries. The music videos for songs released by Z-Girls and Z-Boys through two joint EPs have each racked up around 2 million views or more, with many of the comments on YouTube from fans rooting for the members representing their countries.

Although Z-Girls and Z-Boys may be basking in the love and support of thousands of international fans, it’s been a challenge for them to kick off their career in Korea and go through the rigorous, military-style training of the K-pop system.

Z-Girls’ Vanya and Carlyn and Z-Boys’ Mavin, who were in Indonesian and Filipino pop groups, say that training in Korea is completely different from what they’re used to.

“Back in Indonesia, we trained just by ourselves. We don’t have trainers or teachers to teach us, so we have to take care of everything by ourselves,” Vanya told the Korea JoongAng Daily during an interview on Aug. 23.

“[In Korea] it’s not just about singing and dancing - it includes personality development and how to be punctual, how to be more responsible,” Carlyn, a Filipino member, added. “In Korea there is a systematic way of training. [The teachers] are really strict, and it’s hard, tough, tiring, but we learned a lot and it’s really helpful for all of us.”

Since not all members joined the groups knowing English or Korean, language classes make up a vital part of their training.

“Because we sing English songs, we have different levels [of] lessons,” said Perry from Taiwan. “My English is not really good, so [the teachers] help me to improve my pronunciation or learn more words.”

Korean isn’t generally required for work on their album or concerts, most of which take place abroad. But the members revealed that knowing Korean was important in properly communicating with their management agency, and added that they rely on Joanne, a member from Taiwan who speaks both Korean and English, to act as their spokesperson to agency staff.

Despite coming from different countries and facing language barriers, the members have often been told by fans that they seem like family. They agreed that they feel like they found a new home in Korea after living and training together for nearly a year before their official debut this February.

“I [live] away from my family but it’s like I got my new family here, so I don’t really get lonely,” said Bell, the Thai member of Z-Girls who is the youngest in the group, at just 15 years old.

“From time to time they let us go back to our own country to meet our family again because we miss them, and it’s hard for us to work overseas,” added Carlyn. “But it’s our dream, so we are happy on what we are doing.”

While the focus of Z-Girls and Z-Boys is to foster the idea of “One Asia,” they don’t just hope to stop there.

“We also get praise from Germany, France and Brazil,” said Mavin. “We all feel like now they are looking to us and we are ready to show them [our performances] and meet them if we have a chance.”