Confirmation hearing for Eun is all about Cho

Confirmation hearing for Eun is all about Cho 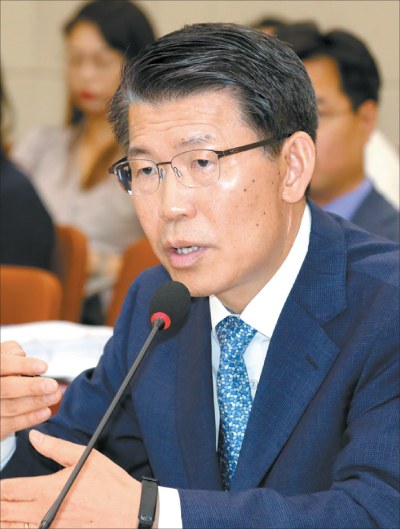 Eun Sung-soo, nominee for chairman of the Financial Services Commission (FSC), at his confirmation hearing at the National Assembly on Thursday. [YONHAP]

In his confirmation hearing at the National Assembly, Eun Sung-soo, nominated as chairman of the Financial Services Commission (FSC), was dragged into the controversy over another nominee, Cho Kuk, President Moon Jae-in’s pick for justice minister.

Long-time public servant Eun told lawmakers Thursday that if Cho and his scandal-plagued family had influence over the management of a private equity fund - as alleged - it would be illegal.

Eun added that it was too early to conclude that Cho committed any illegal act.

“While it would be a problem if a public servant committed any illegal act in a fund’s management,” Eun said, “if he didn’t, there is no need to question the investment itself.”

The FSC nominee said the idea of civil servants investing in the equity market itself shouldn’t be questioned.

The hearing, which was held 20 days after Eun’s nomination by the Blue House, was supposed to focus on the nominee. Instead the focus was on a controversial fund that Cho’s family invested in that turned out to have been managed by his relative.

The size of the investment in the private equity fund in 2017 was one issue: the Cho family invested 7.4 billion won ($6.1 million), far exceeding the total 5.6 billion won that Cho reported as his family’s wealth.

His cousin’s involvement in the fund as the fund managers was another key issue.

Cho is accused of using inside information while working as a Blue House senior secretary to help the fund and, by extension, his family and relatives.

“It would be illegal if there was a side contract or [Cho’s] family was involved in the management of the private equity fund,” Eun said. “But there are no regulations on the relationship between the investor and the [fund] manager.”

He said if it is needed, he will make changes to improve the capital market while working with the Financial Supervisory Services in investigating an allegation of Cho’s shady investments.

“Even before [the justice minister nominee] controversy, it has been my [strong] belief that regulation on private equity funds should be eased,” Eun said.

Earlier this week, prosecutors raided offices and schools implicated in the many allegations surrounding Cho and his family.