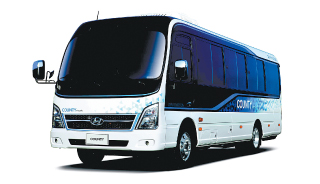 GOYANG, Gyeonggi - Hyundai Motor said Thursday that it plans to develop a lineup of 17 eco-friendly commercial vehicles by 2025 amid a growing push for greener cars globally.

Seven of the cars will be all-electric, and 10 will be fuel-cell electric vehicles, according to the automaker.

“Based on consumer needs and infrastructure, we will continue on with our two-track strategy of offering both electric and fuel-cell hydrogen cars,” said Lim Chung-hwan, head of commercial vehicle development center 2 at Hyundai Motor, during a press briefing held Thursday in Kintex, Ilsan, ahead of the Hyundai Truck & Bus Business Fair to take off there from today.

For large trucks moving cargo over long distances, hydrogen fuel-cell technology will be used as trucks need long driving distances per charge, Lim said. For smaller trucks moving within cities, electric motors are the more likely option as there is more electric car-charging infrastructure in cities.

Intra-city buses will be developed in both fuel-cell electric and electric versions. Hyundai is already working with regional governments to supply fuel-cell electric buses, with one delivered to Busan as recently as last week. By 2022, Busan plans to operate some 100 hydrogen buses.

On Thursday, the carmaker unveiled one of the new models in its green commercial car lineup, an all-electric County bus designed to be used as a local bus. The car can drive a maximum of 200 kilometers (124.3 miles) per charge. Full charging takes about 72 minutes in a fast charging environment.

According to Hyundai, companies will be able to operate the electric bus at roughly one-third the fuel cost incurred for diesel buses.

“We will make Korea’s public transportation greener by introducing a full lineup of eco-friendly buses such as the County local bus,” Lim said.

In the longer term, Hyundai plans to export its eco-friendly commercial cars to Europe and China.

Lee In-cheol, head of the commercial vehicle business division at Hyundai Motor, said on the sidelines of the press event that the company is “considering producing hydrogen fuel-cell electric trucks in China,” though the plan has not been fixed yet.

“We could start production in China from as early as 2023, if we decide to go ahead with the plan,” he said.

During the press event, the carmaker also unveiled its new diesel truck Pavise. The company said the truck stands in the segment between midsize trucks and large trucks.

“The car is for customers who opt for both practicality and large cargo space,” a spokesperson from Hyundai said. The Pavise can carry as much as 13.5 tons of cargo. It runs on a diesel engine with 325 horsepower.

The Hyundai Truck & Bus Business Fair, which exhibits Hyundai’s lineup of commercial cars including the County bus and Pavise, will run from today through Sunday. The newly unveiled Pavise is scheduled to go on sale next month and the County bus next year.