Posco finds more ways to give back to society

Posco finds more ways to give back to society 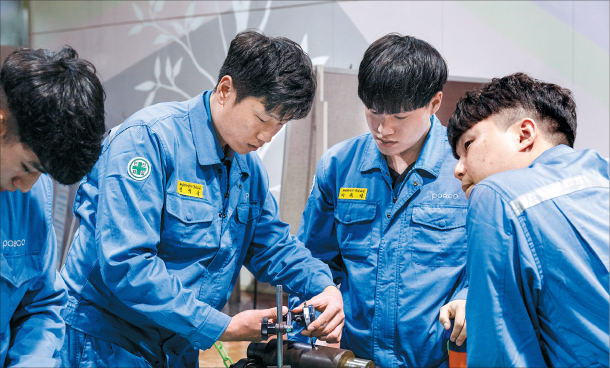 Posco will provide a total of 777.1 billion ($639 million) won to partner companies by 2020 to ease the wage disparity between large corporations and small- and medium-sized enterprises. It has been providing incentives to outstanding partner companies, increasing labor costs to enhance workers’ working conditions and supporting performance sharing, joint technology development, safety management and start-ups.

Meanwhile, Posco has improved the working environment and welfare system of its partners to enhance the trust between the steelmakers and its suppliers and to create a cooperative culture.

It has repaired suppliers’ facilities and expanded recreational facilities for Posco and its partner companies’ employees. The company has also established childcare centers in areas near its Pohang and Gwangyang steel mills to benefit the children of Posco employees and its suppliers.

In addition, the company established employment support programs such as vocational job training programs, the artificial intelligence big data academy for young people and the start-up incubating school last year, aiming to work with 5,500 young people over the next five years. A total of 508 people participated in its employment support programs, and about 120 people successfully got jobs, proving the positive impact on society.

In particular, 18 out of 41 graduates who completed the start-up incubating program have set up their own businesses, and seven have been chosen to receive financial support from the government.

The vocational job training that includes interview strategies, self-introduction guidance and expert advice has been held in Pohang, Gwangyang and Songdo to help strengthen the practical job competitiveness of young job seekers.

Posco has been providing opportunities for program participants to seek jobs in its affiliated companies including Posco ICT. From the second half of this year, it will also offer a job matching employment program with its partners and suppliers for graduates of Posco employment support programs.

It will continue to operate employment and start-up programs to solve youth unemployment problems and revitalize the local economy.