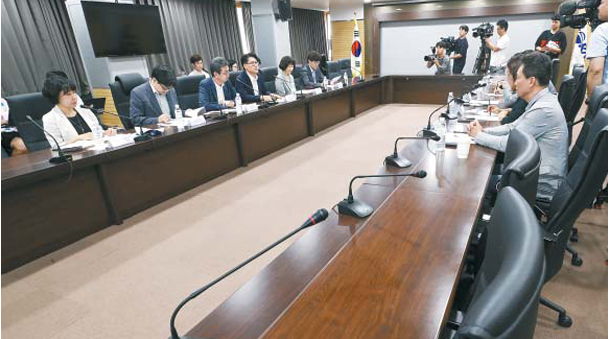 Seats are left empty during a meeting at Korail’s office in central Seoul intended to bring together representatives from taxi companies, the government and IT firms. [YONHAP]

A month has passed since the widely publicized “grand compromise” was made with the taxi industry, but the conflict between traditional taxi companies and new mobility solution providers is far from over.

On Thursday, three of Korea’s four representative taxi associations refused to turn up to the first follow-up meeting after July’s “grand compromise” to collaborate with the government and IT firms in innovating the taxi industry.

This was supposed to be the first gathering of working group officials and executives to discuss details in line with the general directions announced last month. The Ministry of Land, Infrastructure and Transport had called in IT firms in the mobility business, relevant experts and top executives of taxi associations.

However, the only taxi industry representative that actually turned up was from the association of private taxi owners. The other three organizations - the corporate taxi association and two labor unions - did not appear in protest of Tada operator VCNC being included in the meeting.

“Taxi associations welcomed the decision to reform taxi regulations - and yet, they refused to participate in discussions to realize that plan, citing a particular company as their reason,” the Transport Ministry said in a statement released after the meeting.

“It’s a decision that disregards the current demand and public hopes for a new transportation service.”

Transport Ministry official Kim Sang-do, who heads the joint discussion body, made it clear on Thursday that even if the taxi associations refuse to respond, meetings will go on as planned without them.

The Thursday meeting was about how the new working-level discussion body would work. The agenda for future meetings was also discussed. Actual discussions on details for the new regulations will take place from the second meeting, the Transport Ministry said.