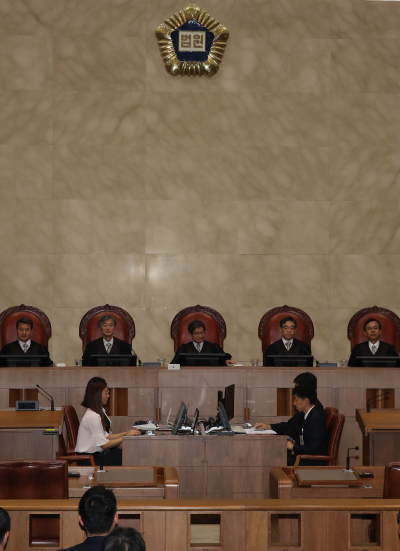 The Supreme Court Thursday ordered a retrial of Samsung Group’s de facto leader Lee Jae-yong, overturning a lower court’s dismissal of key bribery convictions in the corruption scandal that led to the impeachment and removal of former President Park Geun-hye from power.

In a unanimous decision, the court found that the Seoul High Court’s decision of what constituted bribery in Lee’s appeals trial was too narrow, notably regarding the transfer of three horses that Samsung gave to Park’s friend and confidante Choi Soon-sil as part of a sponsorship of Choi’s daughter’s equestrian training.

In return, Lee hoped to use Choi’s sway over the former president to get the Park administration’s help in smoothing the transition of leadership of Samsung Group from his father to himself, the court said.

The Supreme Court’s reversal of the Seoul High Court’s verdicts on bribery is effectively a conviction on those accounts because the lower court must make a final ruling based on Thursday’s decision. Therefore, new rulings on the bribery charges must be made for not only Lee but also Park and Choi. This is likely to lead to a worse sentence for Lee ? and could land him back in jail.

According to a law on punishment for special economic crimes, any bribe 5 billion won or over warrants a prison sentence of three years or more. With the Supreme Court’s determination, the total amount of bribes given by Lee totals around 8.6 billion won.

The decision is bound to shake the country’s leading conglomerate, which faces a renewed leadership crisis on top of fresh uncertainties for the company as a result of Japan’s export restrictions on key industrial materials crucial to its manufacturing operations.

In February 2017, after a political storm that led to Park’s impeachment by lawmakers, an independent counsel investigating the case indicted Lee and four former Samsung executives on bribery charges. Lee was detained before the trial.

Park herself was removed from office by the Constitutional Court in March 2017 and placed under arrest that very month. Choi had been placed under custody since November 2016.

A district court in August 2017 sentenced Lee to five years in prison for bribery, embezzlement, illegal transfer of assets abroad, concealment of criminal profits and perjury at a National Assembly hearing.

The tycoon’s case took a dramatic turn in February last year when the Seoul High Court halved his sentence and released him from detention in a surprise appeals ruling that lifted some of his most serious convictions.

Notably, the Seoul High Court found that there was insufficient evidence to suggest there was a collusive element to Lee, Choi and Park’s relationship, since it wasn’t clear that the company’s gifts to Choi had been given on the basis of Lee’s interest in getting management control over the company. The executive was also acquitted of the heaviest punishment he faced, stemming from the allegations of illegal asset transfers abroad.

Lee’s lawyers expressed “disappointment” at the Supreme Court’s decision to revive the bribery charges, but also gave an apology on behalf of the executive, saying that the company “will not repeat the wrongdoings of the past and focus on [its] role.”

For former President Park, who received a 25-year jail sentence and a fine of 20 billion won in her appeals trial in August 2018, the revived bribery charges may also aggravate her sentence.

But they are unlikely to make a major impact due to the extensive bribery allegations she faces on a variety of other corruption and power abuse charges, notably that she allegedly conspired with Choi to force Korea’s large conglomerates - including Samsung - to donate a total of 77.4 billion won to two foundations under Choi’s name.

In addition, Park is already serving a separate two-year prison sentence for illegally interfering in parliamentary elections in April 2016, while she received another five-year sentence in July for taking off-the-books funds from the country’s spy agency.

In total, the former president’s aggregate prison term from all three cases amounts to 32 years in total.