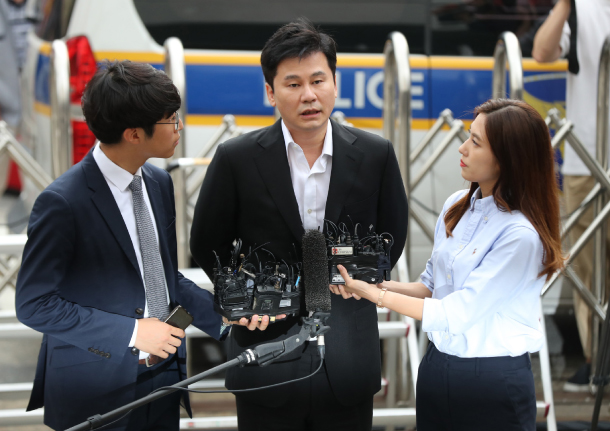 Yang Hyun-suk, former head of YG Entertainment, was questioned by police on Thursday on suspicions of habitual gambling and violating the foreign exchange transaction law.

It marked the first time for Yang to face police as a suspect in the ongoing case that Lee Seung-hyun, a former member of boy band Big Bang who went by the stage name Seungri, is also embroiled. Yang is facing a throng of allegations including habitual gambling overseas, in places such as Las Vegas, multiple times since the 2000s; illegally exchanging money for gambling; and soliciting sex services for foreign investors in Korea in 2014.

“I will submit to the questioning to the best of my ability,” Yang told reporters before entering the Seoul Metropolitan Police Agency’s Intellectual Crime Investigation Team headquarters in Jungnang District, eastern Seoul, on Thursday morning.

Yang’s questioning comes after Lee was grilled by police for 12 hours on Wednesday.

Lee was booked by police earlier this month for habitual gambling overseas including in Las Vegas multiple times and for illegally exchanging money for gambling. Big Bang is managed by YG Entertainment.

Lee was also booked in March for soliciting sex services in 2015 for potential investors and wealthy clients at the Burning Sun nightclub, which he is the co-owner of, and again in 2017 while he was in the Philippines.

Both Yang and Lee have been placed under a travel ban.

Lee is reported to have admitted to some of the charges against him regarding the illegal gambling overseas during questioning on Wednesday.

“I answered truthfully regarding all allegations,” Lee told the press upon exiting the Seoul Metropolitan Police Agency’s Intellectual Crime Investigation Team headquarters in Jungnang District around 10:18 p.m. Wednesday. “I will answer truthfully in investigations in the future as well.”

Lee exited Big Bang in March amid a widening probe into a drug and sex scandal that broke earlier in the year. He was named as a suspect in a massive prostitution and illegal drug scandal which centered on his nightclub, located in Gangnam District, southern Seoul. Police have handed that case over to the prosecution with a request to indict Lee and other suspects.

The scandal was a huge blow to YG’s reputation. After subsequent allegations surfaced - including that Yang used police connections to cover up for his stars’ drug scandals - Yang resigned from his post as head of the entertainment agency in June.