Normally, baseball players tend to slow down as tiredness hits in the later stages of the season. But Oh Jae-il of the Doosan Bears is only getting better. 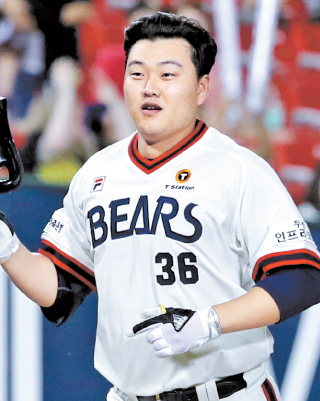 Oh Jae-il of the Doosan Bears runs back to home plate after hitting a game-ending solo home run during a game against the SK Wyverns at Jamsil Baseball Stadium in southern Seoul on July 7. [NEWS1]

Oh started his KBO career with the Hyudai Unicorns in 2005. After the Unicorns were disbanded, Oh joined the Nexen Heores, now the Kiwoom Heroes, in 2009, before finally joining the Bears in 2012.

Playing his eighth season with the Bears, Oh didn’t get off to the best start of the season as he had a 0.190 batting average until the month of April, but that silence didn’t last long. In May, he slowly made his comeback by hitting five home runs and in June, he finally got back on pace with a 0.338 batting average. Since June, Oh’s maintained a monthly batting average above 0.300.

After the Bears’ clean-up hitter Kim Jae-hwan was excluded from the entry on Aug. 26 due to a side injury, Oh was given even more responsibility to step into his shoes. But the bigger role seems to have motivated Oh more. For the month of August he’s on fire, with a 0.354 batting average, six home runs and 23 RBIs as of Thursday’s game.

His recent improvement also helped him improve his seasonal numbers, as he now has a 0.293 batting average with 18 home runs and 82 RBIs as of Thursday’s game.

Below are edited excerpts of an Ilgan Sports interview with Oh.

Q. What’s the story behind such impressive weekly statistics?

A. Our team’s batting has been getting better in general. I just tried to help the team, and that led to a good result. Rather than getting greedy while at bat, I bat according to our team’s situation.

Interestingly, you tend to struggle in March and April every season. Why is that?

Do you feel any pressure because Kim Jae-hwan is out with an injury?

In addition to the cleanup hitters, all nine batters are playing well. Since everyone’s playing well, I don’t feel much pressure because I don’t feel like I have to do well [every time I’m at bat]. Also, [the batting order of the clean-up trio] is the same. The only difference is my first at-bat, whether I bat earlier or later.

What did you focus on during spring training?

I tried to improve my accuracy. In the beginning, I got really stiff [at bat] because I was greedy. As the season went on, I think I’m finally doing things that I worked on during spring training.

How’s the new baseball this season?

I can definitely feel it. Hits that should go over [the fence] are not. This somewhat affected my struggle at the beginning of the season. It mentally affects you when a really good hit, which you thought would go over, doesn’t.

Other batters also probably struggled at the beginning of the season for a similar reason. Since I’m only human, when an outfielder caught a really good hit, I started to think: “How am I supposed to do this.”

I started to question how much harder I need to hit the ball and that led me to be greedy.

What are some statistics that you are disappointed in this season?

I guess I’m not seeing as many big hits as I expected. It didn’t decrease significantly but it’s not what I expected. I think I need to give up on home runs for now. It’s hard with this baseball. When I stand in the batter’s box, it feels like I went back to about 10 years ago. At the time, I weighed 15 kilograms (33 pounds) less than my current weight. So when I swung at Jamsil Baseball Stadium, I couldn’t really get it over the fence. Since I’ve done weight training, I’ve gotten stronger but it feels like I’ve gone back 10 years ago.

You probably have a lot to think about in the offseason. What are the things you’re going to work on once the season ends?

I don’t think it’s right to try to make big hits. Instead, I need to let go of my desire to try and hit more home runs. I think I’m playing better in the second half because I’m trying to make accurate hits.

You used to be strong against left-handed pitchers, but recently you’ve been struggling. What happened?

The harder I try to hit, the worse it got. In the second half of the season, it feels like it’s getting back to normal. I just struggled in the beginning.

What is your goal for the season?

I want to play in all of the remaining games and finish the season strong without getting injured.