Officially, the seventh immaculate inning in the history of the KBO never actually happened. 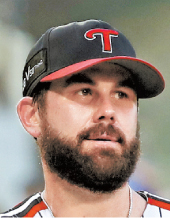 On Thursday during a game between the LG Twins and the Hanwha Eagles at Jamsil Baseball Stadium in southern Seoul, Twins pitcher Casey Kelly struck out three players with the minimum possible number of pitches - just nine.

Stepping up to the plate at the top of the second, Kelly faced down Kim Tae-kyun, Baek Chang-su and Song Kwang-min of the Eagles, dispatching each batter with back-to-back strikes.

On Thursday, Kelly made it seven - although technically, he didn’t.

Kelly’s immaculate inning came at the top of the second. Just one inning later, the game was stopped due to heavy rainfall. Under KBO regulations, a game is counted as rained off if play stops before the end of the fifth inning. If a game continues past that point, the score stands - but if the game is canceled before five innings are over, nothing officially counts and the game is replayed in its entirety during the make-up games at the end of the season.

For Kelly, this means that officially his immaculate inning never happened. In practice, throwing a single perfect inning adds little to a pitcher’s season statistics, but is still proof of their prowess. Although the game doesn’t count, Kelly’s ability remains undeniable, even if he didn’t enter the record books.

Kelly joins some prestigious company in the KBO’s immaculate innings club. The first ever pitcher to throw an immaculate inning here was former Doosan Bears pitcher Danny Rios in 1997, who to this day still holds the record for the most number of games won by a foreign pitcher.

Kang is the only player to have ever thrown two immaculate innings in the KBO, an achievement he shares with just seven pitchers in the history of the Majors.