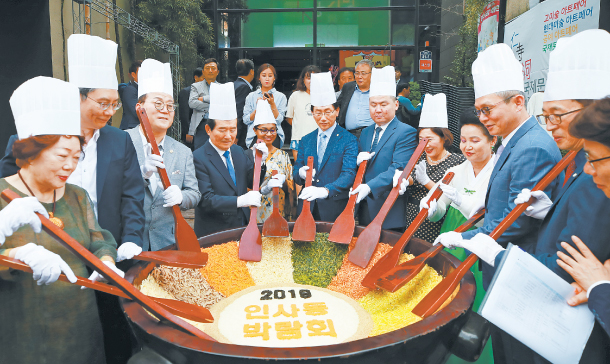 Organizers of the Insadong International Culture Expo, which runs through Monday, celebrated the opening day on Thursday with a bibimbap event. Portions for 300 people of the mixed vegetables and rice were distributed to people passing by. This year’s event has a global focus and is centered around the keywords “participation” and “exchange.” [YONHAP]

An annual festival celebrating the history and culture of the Insa-dong neighborhood has returned this year with the goal of becoming more global.

The Insadong International Culture Expo kicked off Thursday, turning the neighborhood into a weekend-long festival filled with parades, hanbok (Korean traditional clothing) fashion shows and free servings of bibimbap, a mixed vegetable and rice dish. In time for the event, the five floors of the Insa Art Center within Insa-dong were reorganized to display various forms of Korean art from antiques and crafts to more modern paintings by contemporary artists. A craft station also features live demonstration by a lacquer artist through Saturday.

Insa-dong is widely regarded as one of the best neighborhoods in Seoul to experience traditional Korean culture, being home to multiple Korean galleries, tea shops and vendors of traditional crafts and snacks.

This year, the Culture Expo is placing greater emphasis on presenting the traditions of neighboring countries through fashion. This year marks the third edition of the event, which continues from an annual tradition that began in 1987 that celebrates the neighborhood through performances and cultural programs.

“In the past, most exhibitions in Insa-dong were solely about Korean culture,” said President Jeong Yong-ho of the Insa Traditional Culture Association, which runs the Culture Expo, during a press briefing on Monday. “For this festival, we decided to display clothes and objects from 23 Asian and Middle Eastern countries as we pursue this year’s themes of ‘participation’ and ‘exchange.’”

Traditional wear from Cambodia, Mongolia and more are now displayed across the fourth and fifth floors of the Insa Art Center, as well as cultural objects like musical instruments and spears.

The event organizers selected Lim Na-young, a former member of girl groups I.O.I and Pristin, as the festival’s honorary ambassador. Besides being the face of the Culture Expo, Lim will be participating in a parade and fashion show featuring royal Korean clothing on Saturday.

A bibimbap festival signaled an exciting start to the Expo on its first day. After festival organizers mixed a huge bowl of rice and a colorful array of vegetables that could serve up to 300 people, the dish was handed out for free to all walking by, including many tourists.

The main performance to celebrate the festival’s opening takes place on Saturday at 3:30 p.m. at the outdoor stage in South Insa Yard just across the street from Tapgol Park. Experts in traditional Korean music and dance are due to perform. Presentations featuring hanbok, lanterns and rice cakes are also scheduled for Saturday.

Interactive events run every day. At the North Insa Yard, located just beyond exit 6 of Anguk Station, visitors will be able to participate in the Free Traditional Korean Cultural Experience Program, where they can try their hand in making traditional cup holders, pouches and prayer beads.

Anyone who wishes to participate in a walking parade that will run every afternoon is encouraged to dress up in hanbok to show their cheer. There will be translation services in English provided by volunteers stationed throughout Insa-dong.