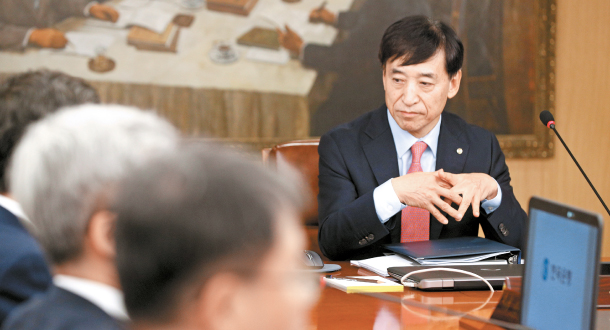 Bank of Korea Governor Lee Ju-yeol presides over a monetary policy meeting on Friday at the central bank’s office in central Seoul. [YONHAP]

Bank of Korea (BOK) Governor Lee Ju-yeol signaled another interest rate cut could be on the way in the face of growing external uncertainties, although the monetary policy committee decided to leave the key rate unchanged on Friday.

The decision to hold the current rate at 1.5 percent is intended to give more time to see how the surprise cut in July is affecting the economy considering the significant geopolitical factors at play.

“[The BOK] decided to hold the interest rate steady to gauge the developments of external conditions after lowering the interest rate last month amid a continued economic slowdown and worsening external situations,” the governor said.

Citing increasing global uncertainties, he said that the key events the BOK is watching include the ongoing trade dispute between the United States and China, the murky future of Britain’s Brexit, Japan’s export restrictions against Korea and Argentina’s default risk.

Although the rate setting committee voted to hold the rate this month, there were signs that the committee is leaning toward a rate cut in the future with dissenting votes this time around and the governor admitting changes may be needed in the near future. 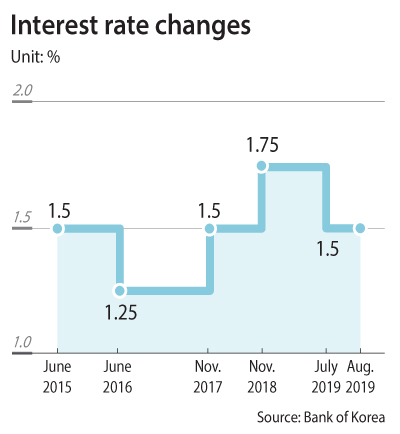 “I think that the BOK has some room to maneuver in monetary policy to respond, when necessary” he said.

Board members Cho Dong-chul and Shin In-seok dissented in favor of a cut. Analysts believe that a cut is likely at the next meeting, set for Oct. 16.

“We maintain the previous forecast of a quarter point cut in October and another cut in the first half of next year,” said Kim Ji-na, a fixed income analyst at IBK Securities.

“The monetary policy committee is deeply worried about the slowing economy,” Kim said, “And the BOK will take a more active step after September where the U.S. Fed and European Central Bank are expected to cut their rate.”

“We expect the BOK to lower the rate in October and then in the first half of next year,” Baek said.

“The expectations for a rate cut will continue since the headwinds at home and abroad are unlikely to be resolved in the short run,” the analyst said.

The geopolitical issues and the prolonged trade war among the world’s largest economies have weighed on the Korean economy, also prompting the central bank to downgrade its 2019 economic projection to 2.2 percent.

The Ministry of Trade, Industry and Energy reported that exports from Korea were $46.1 billion in July, down 11 percent from $51.8 billion a year earlier.

July’s decline was the eighth consecutive month of on-year declines in exports, although the rate was slightly lower than June’s 13.7 percent.

Weakening investment in facilities and construction also got in the way of economic expansion.

Still, analysts see that the substantial level of household debt will act as a burden for any rate cut. Although the pace of increase has been eased, the level keeps growing.

Household debt growth accelerated from a month earlier in July as fresh loans by local banks to households stood at 5.8 trillion won ($4.76 billion), up from 5.4 trillion won a month ago, according to the BOK data.