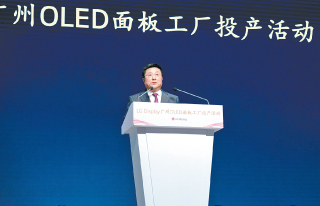 The factory, which opens after two years of construction, covers 427,000 square meters (4,596,189 square feet). It has a capacity to produce 60,000 OLED sheets per month, which with additional investments will be expanded to 90,000 sheets per month by 2021. Mass production started earlier this month, before the official opening ceremony was held Thursday in China.

The plant will produce is 8.5 generation OLED screens in 55-inch, 65-inch and 77-inch sizes. The “8.5 generation” refers to the size of the larger glass panels that are inserted for production and cut into the smaller panels.

The plant will be operated by LG Display Hitech China, a joint corporation of LG Chem, with a 70 percent share, and Guangzhou’s regional government, with the remaining 30 percent. LG explained that the company will fully take charge of operations and management while Guangzhou’s role is closer to that of an investor.

For LG, the Chinese location marks the start of its two-track production plan for OLED panels, which adds to an existing OLED factory in Paju, Gyeonggi. Combined with the factory in Paju and the additional expansions planned to be completed in 2022, the company expects its monthly input capacity will reach 205,000 OLED sheets by 2022, which translates to more than 10 million OLED TV panels.

In the display market, China is the largest ongoing threat for Korean manufacturers - especially in LCD panels where Chinese firms have been recently pulling down market prices with oversupply through government-supported investments.

However, LG says that in the OLED display business - which requires a higher level of technology than LCD that is as yet unmatched by any other TV maker - the rising demand for premium television products suggests a rosy future.

The main reason for China’s attractiveness as a market is its size. The country has the largest TV market in the world. In OLED TVs, market research firm IHS Markit predicted annual sales this year will reach 170,000 units and jump to 700,000 units by 2021.

China is also the TV production base for not only local makers but also other global brands including Sony and Philips.

However, LG Display’s entrance into China as a production base has spurred worries of technology and knowledge leaks. The company stated that it had already implemented measures to prevent this, including stationing Korean staff at core stages in production and concentrating the R&D workforce at its Korean facilities.