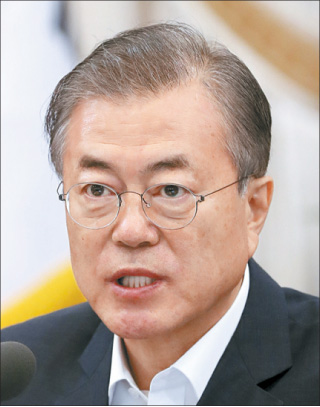 South Korean President Moon Jae-in said he is “ready to embrace and cooperate” with Japan if it returns to the table for dialogue, stressing that historical issues should be “dealt separately” from economic cooperation.

In a written interview with the Bangkok Post published Friday, Moon denounced Japan for carrying out “unwarranted economic retaliation” against South Korea in relation to issues of history, saying the recent measures were “all the more shocking” because Japan benefited from the system of free trade through the years and actively championed free trade on the international stage.

“The damage inflicted by Japan’s measures will negatively impact not only Korea but also the global economy,” Moon said, according to English transcripts released by the English daily.

“Korea’s position is that history issues should be dealt with separately from economic cooperation, which must be maintained. It makes no sense to hurt each other’s economy because of issues that lie outside the economic realm,” added Moon. “I’m ready to embrace and cooperate with Japan when it returns to the table for dialogue and cooperation, whenever that may be.”

Japan on Wednesday removed South Korea from its so-called white list of countries given preferential treatment in exports, implementing a decision reached by its cabinet at the beginning of August. In early July, it implemented regulations on the exports of three high-tech materials needed to make semiconductor chips and displays in the South.

Moon’s interview with the Thai newspaper was published two days before he was set to embark on a three-leg Southeast Asian tour on Sunday that will take him to Thailand, Myanmar and Laos. Moon is expected to stay in Thailand from Sunday through Tuesday, and during his trip, meet Prime Minister Prayuth Chan-ocha for bilateral talks. The Blue House said Moon will request the countries’ support for upcoming summits in Busan involving the 10 member states of the Association of Southeast Asian Nations (Asean).

In late November, Moon is scheduled to host a special summit with his counterparts from Asean in Busan and follow up with a separate summit in the same city with five Asean nations located along the Mekong River: Thailand, Myanmar, Laos, Vietnam and Cambodia.

Moon once again floated the possibility of inviting North Korean leader Kim Jong-un to Busan for the South Korea-Asean summit, saying it would be “very meaningful” if Kim came to South Korea for the meeting.

“President Joko Widodo of Indonesia proposed inviting Chairman Kim Jong-un to the upcoming summit, and the proposal was endorsed by a number of heads of state,” said Moon. “It would be a very meaningful occasion for peace on the Korean Peninsula and in East Asia if Chairman Kim is given the chance to join the gathering.”

Moon, however, was quick to add that the decision depends on denuclearization talks.

“Of course, the decision on whether to invite Chairman Kim should be made in light of the progress being made in the peace process on the Korean Peninsula, including the dialogue between the United States and North Korea,” Moon said. What matters most is that Pyongyang puts denuclearization into “concrete action,” he underscored, without elaborating.

On his upcoming visit to Thailand, Moon said he hopes to see bilateral ties improve after signing a strategic partnership last year.

“By linking the Thai government’s Thailand 4.0 policy and the Korean government’s innovative growth initiative,” he said, “we will be able to create not only synergy effects, but also future growth engines together.”