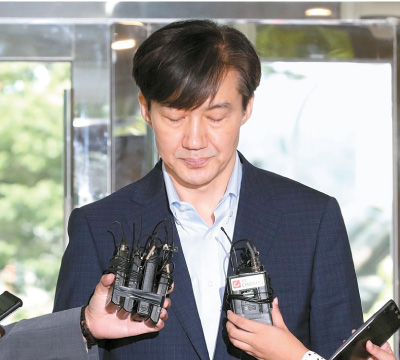 Lawmakers on the parliamentary Legislation and Judiciary Committee failed to adopt a formal report scheduling justice minister nominee Cho Kuk’s confirmation hearing on Friday, raising the possibility that the hearing might not be held at all.

The report, which normally includes the specific schedule of a confirmation hearing and officially declares the hearing will be held, was supposed to formalize a decision reached by the committee’s lawmakers on Monday when they verbally decided to hold Cho’s hearing next Monday and Tuesday at the National Assembly in Yeouido, western Seoul.

But lawmakers from the ruling Democratic Party (DP) and main opposition Liberty Korea Party (LKP) clashed throughout this week over a list of witnesses to summon for the hearing, which ultimately led to the committee failing to adopt the report by press time Friday. The LKP refused to agree to the report unless the DP accepted its roster of witnesses.

The LKP, which vehemently opposes Cho’s appointment, wants to call in Cho’s family members to be questioned about their wealth and alleged hanky-panky over school admissions. The DP is resisting, claiming the request to be “inhumane.”

If the committee fails to adopt the report by this weekend, Cho’s confirmation hearing may not be held.

Minister nominees in Korea are subject to non-binding confirmation hearings conducted by the National Assembly before their formal appointment by the president, an often brutal process of questioning. By law, however, the president doesn’t need endorsement from the National Assembly to appoint ministers, meaning Moon can go ahead and appoint Cho no matter what happens at his confirmation hearing - or if no hearing is held at all.

But in doing so, the DP could face a backlash from opposition lawmakers, who could boycott parliamentary activities as they have in the past. Moon’s approval rating is also at stake given that recent polls indicate the majority of Koreans are against Cho’s appointment as justice minister.

The LKP urged the DP on Friday to postpone Cho’s confirmation hearing so they can have more time to decide on witnesses, but the DP declined, saying the hearing should be held on Monday and Tuesday as planned.

The Blue House on Friday urged the National Assembly to hold Cho’s hearing next week as scheduled.

“The National Assembly must obey the law by holding the confirmation hearing and carry out their duty to the public,” Kang Ki-jung, senior presidential secretary for political affairs, said during a press briefing. Kang said it was “deeply regrettable” how some figures in opposition parties were trying to flunk Cho through a “political offensive.”

Cho faces a wide range of allegations about his family’s wealth and daughter’s academic successes.

President Moon’s son, Moon Joon-yong, defended Cho’s daughter in a Facebook post Friday, telling her it’s okay to “speak out if that’s what you want.”