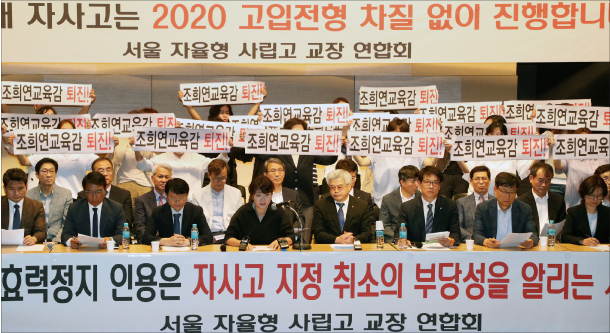 Eight autonomous private high schools in Seoul will keep their special status for now, after local courts on Friday ordered authorities not to revoke their licenses.

After reviewing requests by Kyunghee High School and Hanyang University High School, a branch of the Seoul Administrative Court ordered an emergency halt to the government’s revocation of the schools’ licenses, to “prevent irrevocable damage from occurring as a result of the measures.”

These high schools, located in various parts of Seoul, can admit and enroll new students for the spring semester and operate as usual until administrative courts make their final ruling on whether the government’s decision to revoke their licenses based on public assessments was valid.

The city education office assessed 13 autonomous private high schools in Seoul this year and announced earlier this month that nine of them did not pass their test and should be revoked of their special status and remodeled into regular high schools.

Autonomous private high schools are financially independent from the government. In return, they are granted more freedom in choosing students and developing their curriculum and tuition.

The assessment follows guidelines provided by the Ministry of Education. However, local education offices can choose to follow or alter these guidelines. The assessment criteria may include the tuition, curriculum, teacher aptitude, the state of facilities and students’ assessments.

Of the nine private schools that did not pass their test, eight of them filed a lawsuit asking courts to suspend the government order to strip their status immediately due to concerns that the measure could reduce the number of enrolled students and increase fiscal difficulties.