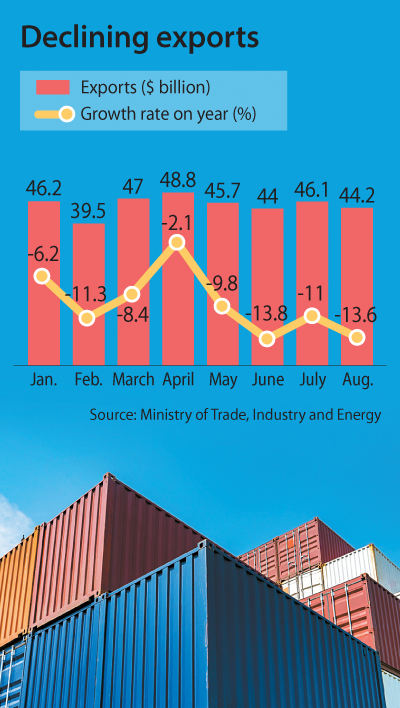 Exports dropped in August for the ninth consecutive month - the fourth-longest run of such declines in Korea’s history - weighed down by global trade tensions and a plunge in semiconductor prices.

The Ministry of Trade, Industry and Energy reported Sunday that outbound shipments tumbled 13.6 percent to $44.2 billion in August from the previous year as exports to China and the United States, Korea’s top trade destinations, fell amid an intensifying trade dispute.

It was the second-sharpest decline this year after June’s export performance, which was down 13.8 percent from a year earlier.

Exports to China fell 21.3 percent, the 10th consecutive month of on-year declines to that country, while shipments to the United States declined 6.7 percent last month.

China is Korea’s largest export market, taking 25.6 percent of its exports. Concerns are growing about China’s economy and the effects of the trade war with the United States. It is expected to grow at its slowest rate this year since 1990.

The International Monetary Fund (IMF) in early August revised China’s economic growth outlook for this year from 6.3 percent to 6.2 percent.

Overall computer chip exports were down 30.7 percent compared to a year ago. The weak performance of semiconductors was largely due to DRAM prices. In fact, semiconductor exports by volume increased 4.5 percent last month.

According to the Trade Ministry, the price of a single 8-gigabyte DRAM memory chip declined 54 percent in August from the previous year to reach $3.54. A 128-gigabyte NAND Flash memory chip cost $5.41 in the same month, a 14.4 percent on-year drop.

The latest government data indicated that Korea’s ongoing diplomatic conflict with Japan had a limited impact on trade last month.

Imports from Japan fell 8.2 percent in August from the previous year compared to an on-year drop of 13.8 percent in June, which was before the trade dispute began.

Since July 4, Tokyo has restricted exports of three industrial materials - photoresists, fluorinated polyimide and hydrogen fluoride - essential to semiconductor and display production in Korea and downgraded Korea from its list of preferential trade partners.

The Trade Ministry said that the three products represented only 1.8 percent of total imports from Japan in July and that they had a negligible influence on overall trade figures between the two countries. The ministry also added that domestic factories using the materials had yet to experience delays as a result of the export restrictions.