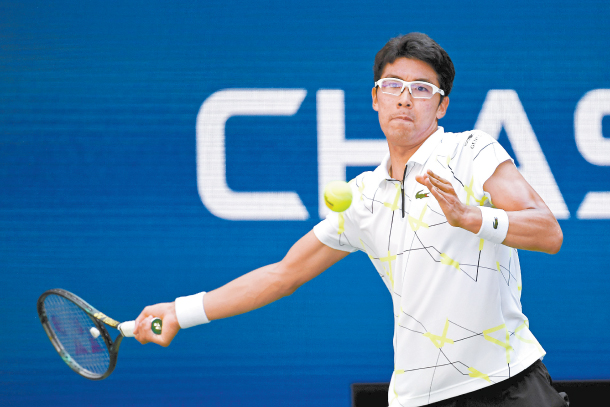 Chung Hyeon of Korea returns a shot against Rafael Nadal of Spain during their men’s singles third round match at the U.S. Open at Arthur Ashe Stadium inside the USTA Billie Jean King National Tennis Center in New York on Saturday. [GETTY IMAGE/YONHAP]

Chung Hyeon defeated one left-handed Spanish player at the U.S. Open. He couldn’t get past another one.

The 170th-ranked Korean player was dominated by world No. 2 Rafael Nadal in the third round of the season’s final Grand Slam tournament in New York on Saturday (local time), losing in straight sets 6-3, 6-4 and 6-2 in just under two hours at Arthur Ashe Stadium inside the USTA Billie Jean King National Tennis Center.

Chung defeated Fernando Verdasco, the aforementioned Spaniard southpaw, in Thursday’s second round to set up a meeting with Nadal, eking out a five-set victory after dropping the first two sets and then saving a match point to force a tiebreak in the final set.

Chung, 23, played consecutive five-set affairs that lasted nearly seven hours combined. Nadal, on the other hand, won his first round match in straight sets and then had a walkover in the second round after his opponent, Thanasi Kokkinakis of Australia, withdrew because of a right shoulder injury.

Chung is now 0-3 in his career against Nadal.

In the first set, the players traded games until Nadal broke Chung in the sixth game to take a 4-2 lead. Chung was off the mark early on with his backhand, normally his strength.

Chung went up 0-30 in the next game, two points from breaking Nadal, but the Spaniard won four straight points to hold his serve and open up a 5-2 lead.

Chung got a game back by holding his serve, but Nadal closed out the set in the next game, punctuating it with his fourth ace of the match.

Chung was broken in the fifth game of the second set, and Nadal promptly took a 4-2 lead. Chung couldn’t break Nadal once as he conceded the second set 6-4.

Chung flashed signs of brilliance in the second set with four aces but couldn’t overcome unforced errors at key junctures.

With the game score tied at 1-1 in the third set, Chung ran into trouble in his service game. At 30-30, Chung committed his first double fault of the match and allowed Nadal to break him after deuce.

After holding his serve for a 3-1 lead, Nadal threatened to go up 4-1 by taking a 15-30 lead in the fifth game. Chung battled back to win that game, thanks to a pair of brilliant backhand cross-court winners.

But it only delayed the inevitable. Nadal broke Chung for the second time in the set for a 5-2 lead, with Chung imploding with a double fault and three unforced errors, and Nadal finished off Chung in the next game with an emphatic forehand winner.

This was Chung’s first appearance in the third round at the U.S. Open. Only one Korean, retired star Lee Hyung-taik, has gone past the third round in New York, having reached the round of 16 in 2000 and 2007.

Chung reached a career-high No. 19 in the world rankings following that surprise performance in Melbourne but has since fallen on hard times due to assorted injuries. After playing in the second round at the Australian Open in January this year, Chung ended up missing the next two majors, the French Open and Wimbledon, with injuries. He had to play in the qualifiers to get into the U.S. Open.