Dressing down is way to work at Korean Air

Dressing down is way to work at Korean Air 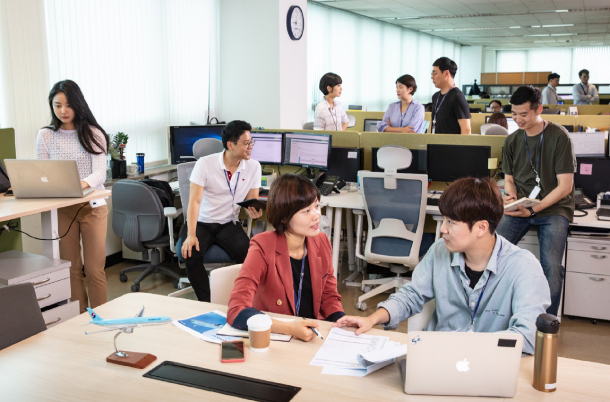 Korean Air employees work in casual clothes on Thursday in a trial ahead of the abolishing of its dress code today. [KOREAN AIR]

Korean Air employees will be wearing jeans and shorts to work starting today, as the airline tries to create a more flexible and less hierarchical corporate culture by abolishing a formal dress code.

According to the airline on Friday, all employees working at its local offices will be free to wear casual clothing at work.

Cabin crew and employees at reception desks, however, will still have to wear uniforms. Workers in overseas offices will decide on how casual they can be depending on the culture and weather of their location, the airline said.

“We hope to maximize work efficiency and encourage communication between employees in a more casual environment,” the company said in a statement.

The airline is actually following attempts by other Korean conglomerates to get less stodgy. In March, Hyundai Motor Group ditched its formal dress code.

The loosening up is also related to a generational shift of leadership in conglomerates.

Korean Air is now led by Cho Won-tae, son of the late Hanjin Group Chairman Cho Yang-ho, who is in his 40s. At Hyundai Motor Group, Executive Vice Chairman Euisun Chung, also in his 40s, essentially took over company management with a promotion to his current post last year after his father, group Chairman Chung Mong-koo, reduced his public appearances.