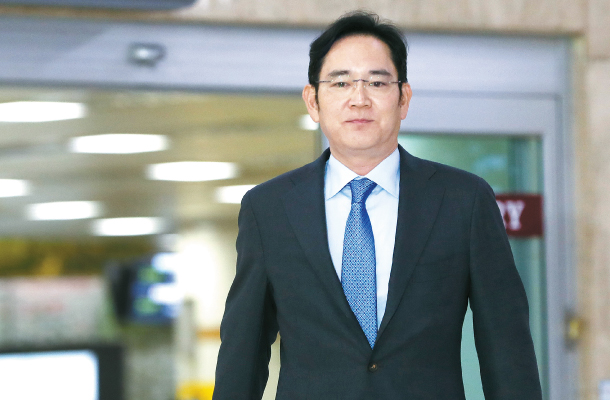 One and a half years after Samsung Electronics Vice Chairman Lee Jae-yong’s release from prison, Samsung Group faces another year of uncertainty following a Supreme Court decision Thursday to retry Lee’s bribery case.

The court’s ruling adds another challenge to Korea’s largest conglomerate, which is battling shrinking operating profits amid falling DRAM prices, new trade regulations from Japan and a slowing Chinese economy due to a trade war with the United States.

Lee’s retrial is a major worry for the group. Depending on its result, Lee could return to jail and Samsung may have to go on without a top decision maker. Lee served a year in prison from February 2017 to February 2018 when he was released thanks to an appeals court reducing his prison sentence.

“The sense of crisis felt among company insiders is severe,” said a Samsung Electronics source who requested anonymity.

“Information and communications technology is a field that changes rapidly,” he continued. “Missing the right timing for investments and decision-making can push the company down the ranks in no time.”

Another Samsung source added the company is under the “triple distress of poor performance results, Japan’s trade restrictions and the U.S.-China trade war.” During the first half of this year, Samsung Electronics’ revenues fell 9 percent to 108 trillion won ($89 billion) and operating profit plummeted 58 percent to 12 trillion won.

At the moment, the company is struggling to secure core materials to make semiconductors despite the new restrictions from Japan. With Korea-Japan relations deteriorating, there’s no knowing which materials will be allowed to be imported.

“Global rivals, including Chinese companies, are hot on Samsung’s heels, and yet [Samsung] affiliates and employees’ morale have been dropping with the lack of top leadership,” said another anonymous Samsung Electronics source.

Starting with the 2017 corruption scandal, prosecutors have investigated Samsung on a myriad of issues from an accounting scandal to accusations that Samsung wrongly dissolved its labor unions.

During that period, prosecutors raided Samsung offices with warrants 27 times, and 31 executives were indicted. Samsung insiders claim there’s a chilling effect on decisions by top executives and company staff, making it hard to overcome the crisis.

Another reaction from in and outside Samsung on Thursday was that the Supreme Court decision didn’t come without a silver lining. Lee’s retrial could conclude that his offering of a bribe to the former president was a “passive” one made upon the president’s request. There is possibility of Lee having his term reduced.

But core decision-making by top management could be affected, increasing uncertainty among Samsung affiliates for the next six months to a year, until the next trial takes place.

“Vice Chair Lee Jae-yong now has to prepare for the retrial, which raises the possibility of delays for [Samsung’s] decision-making for future businesses,” said Jeff Kim, an analyst at KB Securities in a report released last Thursday.

“Massive overseas acquisitions, which stopped after the Harman deal in 2017, are expected to be postponed. Samsung Electronics, which saw stagnant revenue growth for the last seven years at the 230 trillion won level, may see obstacles in its [original] plan to develop mid- and long-term strategies under the owner’s lead.”

“With the U.S.-China trade war and Japan’s export restrictions, we’re in a desperate situation in which local companies need support and encouragement to invest and create jobs,” said the Korea Employers Federation Thursday.

“For our industries to lower overseas dependency in core parts, material and cutting-edge technology, Samsung Group should play a pivotal role in heading development in future growth engines like non-memory chips and bio so that Korea can grab the leadership in such fields earlier than others,” it added.

However, analyst Kim Jang-yeol, research center head for Sangsangin Investment & Securities, pointed out that the actual impact of Lee’s retrial may be limited to some IT fields.

“It’s reasonable to say that there will be differences per industry,” said Kim in a Friday commentary.

“In the end, it’s about the industry’s fundamentals: competitiveness and market trends. The possibility of a company leader disappearing for a whole does not change which fields should be invested in first,” said Jang.

But Samsung’s chip business could suffer a substantial blow. At the moment, the company is delaying investment due to a slow memory market.

“It’s highly possible that if the chip market doesn’t show improvement, there won’t be progressive investment decisions. (…) The situation was already high-risk, high-return - if high returns aren’t ensured at this stage, it will be difficult to push for decisions without the group owner’s resolution,” Jang added.

The conglomerate plans to maintain its current “emergency management” system led by different task forces. Before 2017, Samsung Electronics’ “future strategy” office was the de facto control center of the entire Samsung Group. It was dismantled in 2017 after it was revealed as the contact point between Lee and former President Park’s administration.

After its closing, the group established task forces divided between the electronics, finance and construction units.

“Each task force is a decision-making body on their own. Lee is reported to by each task force head. This system will continue on,” said a Samsung Electronics source. The conglomerate’s main concern, however, is that this structure isn’t optimal to decide on issues that transcend business divisions.

Regardless of the Thursday ruling, Samsung will continue on with planned investments. After Lee’s release in February 2018, the company announced a three-year, 180-trillion-won investment plan with focuses on 5G connectivity, artificial intelligence, the Internet of Things and semiconductors. Last April, it announced another 133 trillion won investment in non-memory chips, a segment the company is relatively weak in, with an aim to rank global No. 1 by 2030.

For now, Lee will continue visiting Samsung factories and operations nationwide, the company said - a tour he started last month to boost morale.

But now that he’s facing retrial, industry watchers say it won’t be as easy for Lee to be as externally active. Appearances at global conferences may not be as frequent as well.

“It’s unlikely that Lee will be as visible as he is now, but nonetheless, Samsung is stuck in a desperate environment so he won’t be able to completely miss out on efforts to take care of the field,” said an industry watcher.