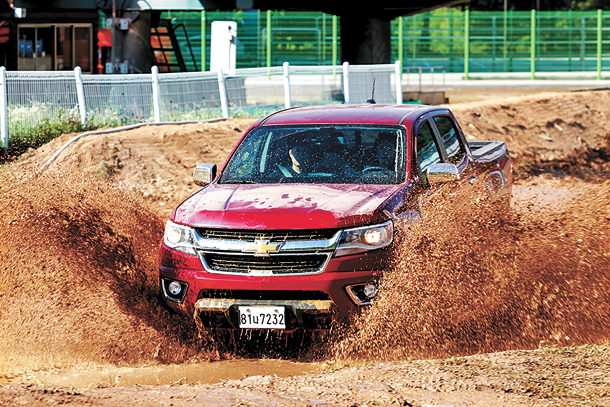 The Chevrolet Colorado pickup truck drives through a puddle during a media event on Aug. 26 held at a ski resort in Hoengseong, Gangwon. [GM KOREA]

HOENGSEONG, Gangwon - In recent years, General Motors (GM) has seen its sales decline in Korea due to a lack of new models and toughening competition with domestic and foreign automakers. The automaker hopes the launch of its Chevrolet Colorado pickup truck in Korea will turn things around.

The Detroit-based company hopes to turn that sales slump around with the launch of its authentic American pickup truck Chevrolet Colorado in Korea for the first time in late October.

“Many of our customers have been eagerly awaiting the Colorado pickup truck since we introduced it in Korea last year,” GM Korea President Kaher Kazem said while unveiling the new truck to media last week in Hoengseong, Gangwon. 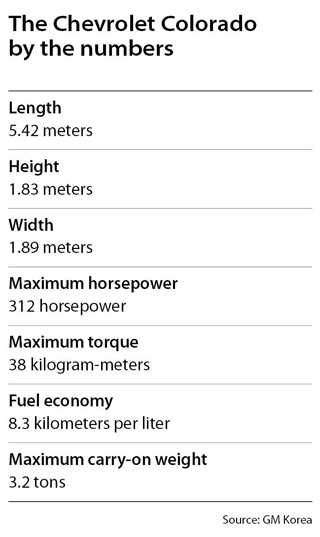 “The Colorado has been well received in the United States, and we believe this authentic American pickup will also be popular in Korea.”

The automaker is taking preorders for the Colorado until Oct. 15 and will start official sales later that month. The Colorado, first launched in 2015, has sold more than 450,000 units in global sales thus far.

The mid-sized vehicle is much loved by pickup truck fans, so expectations were already high for this test drive.

The Chevy proved to be up to the hype, performing well in off road tests after the launch event last week.

The car is markedly simple in its exterior design. It doesn’t have much to make it stand out visually, as the large headlamps and two wide grilles are the only details to be found on the front.

Suffice to say, the Colorado is not the most beautiful car on the road, but then again, it probably isn’t trying to be.

It’s also obvious that the Colorado won’t win any awards with its interior design. Composed mostly of hard plastic, this Chevy does not try to provide even the slightest hint of luxury. Leather seats were there, but even those weren’t very impressive.

But let’s face it. Nobody expects a pickup truck to be a Rolls Royce. The Colorado has just enough details and visually appealing features for a pickup truck, and while I may not be a fan of such simplicity, Korean truck fans may fall in love with the Colorado precisely for that reason.

GM Korea says the Colorado is a mid-size pickup truck, but it never felt like one during my ride. The truck is 5.4 meters (17.7 feet) in length, 1.83 meters tall and 1.89 meters wide, but the interior feels much more spacious.

On the rocky off-road course up the side of a mountain in Gangwon, the Colorado proved its explosive power. The pickup truck with a 3.6-liter (0.95 gallon) six-cylinder gasoline engine boasts up to 312 horsepower and 38 kilogram meters in torque.

At no time was I worried about the truck losing power and rolling back down the hill.

The Colorado screamed its mighty presence on the rough terrain and helped me reach wherever I wanted to go without any struggle.

Even with just two wheels on the ground, the Colorado kept its balance and ensured that nobody was going to get hurt during the ride.

But the Colorado can do much more with its powerful engine and 17-inch wheels, as the mid-size pickup truck can pull anything that weighs up to 3.2 tons. The Chevy can still easily rock its way up the mountains and slopes with that much weight on its back.

The car can also travel in water, as the Colorado can safely cross rivers of up to 1 meter in depth. While the specification says it can cross up to 80 centimeters, the Chevy could endure much more without a drop reaching its engine or interior.

But questions remain over whether this massive off-road beast would be a realistic option for Korean consumers in urban areas. While the vehicle does come with frontal collision prevention, lane assist and warning systems, parking may not be easy in highly packed regions like Seoul.

The size and explosive off-road performance also comes with a cost. While no sane person would expect a pick-up truck to be as fuel efficient as hybrid sedans, the Colorado can only travel 8.3 kilometers with 1 liter of gas. Considering fuel prices in Korea, the Colorado could be a hefty financial burden for some even after the purchase.

As the Colorado reaches Korea with no visible competitor, the powerful mid-size pickup truck could be a promising option for those who enjoy off-road experiences or like to carry huge amounts of stuff with them.

But you might want to consider whether you are skillful and affluent enough to maneuver the Chevy down the packed streets in Seoul while paying for all that gas.