CFC’s transfer to Pyeongtaek is set for 2021

CFC’s transfer to Pyeongtaek is set for 2021 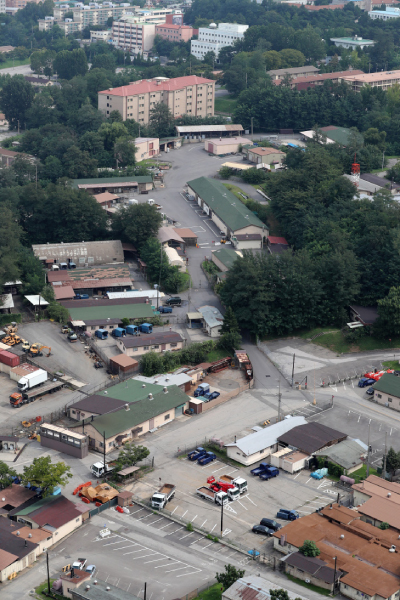 Most amenities for U.S. soldiers and family members in Yongsan Garrison in Seoul will be shut down as of Oct. 1, as an ongoing relocation is being carried out. [YONHAP]

Korea-U.S. Combined Forces Command (CFC) will be relocated from the Yongsan Garrison in Seoul to Camp Humphreys in Pyeongtaek by 2021, defense officials announced Sunday.

The CFC, Korea’s Ministry of National Defense and Joint Chiefs of Staff made the announcement jointly on Sunday, adding that a timeline will be finalized in the U.S.-Korea Security Consultative Meeting coming at the end of October or early November.

The move had been forewarned by Washington and Seoul in June, but Sunday was the first time an exact time for the move was announced.

The move of the CFC will be in time for the expected transfer of wartime operational control (Opcon) over Korea’s military forces from the United States to Korea by 2022.

It is also part of an ongoing process of relocating U.S. military bases across the country.

Korea and the United States agreed in May 2003 to relocate 80 U.S. army bases across the country to Pyeongtaek and Daegu. As part of the agreement, the U.S. Forces Korea (USFK) and United Nations Command (UNC) moved their headquarters to Camp Humphreys in June 2018.

There are at least 26 U.S. military bases yet to be relocated across the country, according to the Blue House, which announced Friday that it intends to speed up the process.

“The National Security Council decided today to push for an early return of the territories occupied by 26 U.S. military bases, which will be moved to Pyeongtaek and other areas,” the Blue House said in a statement on Friday.

The timing of that announcement was noted by some experts, who saw a connection with Korea’s diplomatic problems with Japan - and the U.S. reaction to it.

“It’s a message by the Korean government to the United States regarding its recent comments about [Korea pulling out of the] General Security of Military Information Agreement [or Gsomia], which supported Japan and bluntly criticized Korea,” said Kim Dong-yeop, professor of North Korean studies at Kyungnam University’s Institute for Far Eastern Studies in central Seoul.

“The Korean government is expressing to the United States that it, too, has a voice and can be blunt… and that it has things to say about hosting the U.S. army in Korea.”

After the Blue House announced on Aug. 22 its decision to pull out of the military intelligence-sharing pact with Japan, first signed in 2016 and renewed annually, both U.S. Secretary of State Mike Pompeo and U.S. Defense Secretary Mark Esper expressed disappointment with Seoul’s decision.

Korea’s Ministry of Foreign Affairs responded by calling in U.S. Ambassador to Korea Harry Harris to the ministry building on Thursday to ask the U.S. government to stop expressing disappointment at the decision.

“The topic of relocation of U.S. military bases is a sensitive one to bilateral relations,” said Park Won-gon, professor of international relations at Handong Global University in Pohang, North Gyeongsang. “It’s a move by Korea to place pressure on the United States.”

As if expecting such analysis, the Blue House warned against reading too much into the timing of the announcement.

“We’re simply saying that we will speed up the process of relocating 26 bases,” a Blue House official told a group of reporters on Friday. “The announcement has nothing to do with the end to Gsomia or other regional security issues involving the United States.”

The official added that the Korean government informed the U.S. government in advance about the details of Friday’s announcement.

When asked about the announcement during a meeting with the press at the White House on Friday, U.S. President Donald Trump emphasized a “good relationship with Korea,” before adding, “we’ll see what happens.”