Ri had been set to attend the 74th session of the UN General Assembly in New York, but Pyongyang informed the United Nations last week that an ambassador will be attending the high-level gathering scheduled to kick off on Sept. 24, according to diplomatic sources over the weekend. 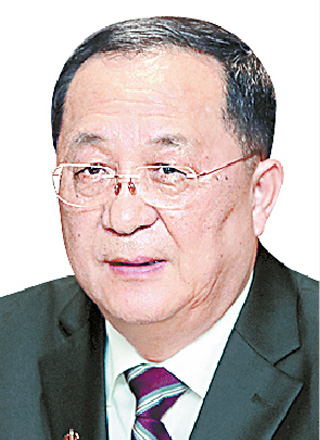 North Korea requested a change in the level of its keynote speaker at the General Assembly session from “minister” to an ambassadorial, or “Corps Diplomatique,” official. It also pushed back the date of its representative’s address from Sept. 28 to Sept. 30.

A senior UN source told the JoongAng Ilbo Saturday, “it has been confirmed that Foreign Minister Ri notified the UN last week that he will not attend. Thus, a high-level meeting between North Korea and the United States looks difficult.”

This is the first time that Ri will miss a General Assembly session since he was appointed North Korea’s top diplomat in May 2016.

Denuclearization talks have been at an impasse since the second summit between North Korean leader Kim Jong-un and U.S. President Donald Trump in Hanoi collapsed on Feb. 28. The two leaders met abruptly and briefly at the inter-Korean truce village of Panmunjom at the demilitarized zone on June 30, during Trump’s visit to Seoul, and agreed to resume talks in the following weeks. But none were held. Instead, Pyongyang has conducted a series of short-range missile tests in the past several weeks around the same time as the joint military exercises between Seoul and Washington.

Speaking at the National Convention of the American Legion last Tuesday in Indianapolis, Pompeo said, “North Korea’s rogue behavior could not be ignored,” in an apparent effort to galvanize support for Pyongyang’s denuclearization.

In turn, North Korean First Vice Foreign Minister Choe Son-hui on Saturday called out Pompeo’s comment on “rogue behavior” and warned Washington not to “test” its patience “if it doesn’t want to have bitter regrets afterwards.”

Criticizing the secretary by name, Choe, in a statement issued by the North Korean Foreign Ministry, said, “Pompeo again irritated us” with use of “improper language,” adding that the U.S. administration will “regret” such a serious “insult.”

Choe said, “our expectations of dialogue with the United States are gradually disappearing, and we are being pushed to reexamine all the measures we have taken so far.”

However, she added that the North is “very curious” about the intentions behind Pompeo’s “thoughtless remarks” and “will watch what calculations he has.”

Choe was careful to lash out only at the “upper echelons of the U.S. administration” rather than at President Trump.

In early August Ri did not attend the Asean Regional Forum (ARF), seen as a way to avoid meeting Pompeo. The North Korean foreign minister usually attends the ARF, a security forum that involves all members of the six-party talks on North Korean denuclearization that have been dormant since 2008.

By skipping the UN General Assembly, Ri appears to be signaling that he has no intentions of meeting with Pompeo.

Pompeo on Friday called out Pyongyang’s human rights while marking the United Nation’s International Day of the Victims of Enforced Disappearances, stating, “in North Korea, authorities disappear religious practitioners and those accused of political crimes.”

The U.S. Treasury also imposed fresh sanctions Friday on three companies based in Hong Kong and Taiwan, along with two individuals, accused of involvement in illicit ship-to-ship transfers of refined petroleum goods, in violation of UN Security Council sanctions.

Lower-level talks, led by Stephen Biegun, the U.S. special representative for North Korea, on Washington’s side, are expected before high-level talks between Pompeo and a North Korean counterpart, which could pave the way to a third North-U.S. summit.

The two sides have struggled to reach consensus on the scope of denuclearization needed for sanctions relief and security guarantees for the North.

Biegun, a proponent of a “flexible” approach, during a visit to Seoul late last month said Washington is prepared to engage in dialogue as soon as North Korea responds.

However, this doesn’t mean that dialogue isn’t happening behind-the-scenes.

A South Korean government source familiar with North-U.S. negotiations said, “the New York channel between North Korea and the United States is in motion. The two sides are discussing denuclearization measures including a freeze of the Yongbyon nuclear complex and the issues of reporting and verification.”