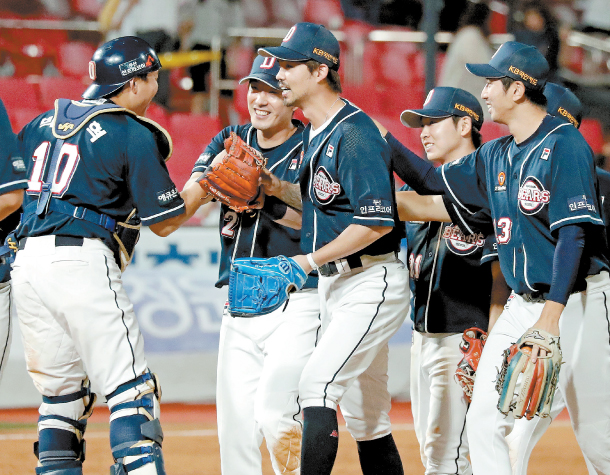 Doosan Bears celebrate after winning a game against the KT Wiz at Suwon KT Wiz Park on Aug. 30. [NEWS1]

Up until Aug. 26, it seemed almost impossible for the Doosan Bears to win the regular season title this year, as they were a good 6.5 games behind from the league leader SK Wyverns. However, after sweeping its two-game series against the Wyverns on Aug. 27 and 28, as well as a sweep against the Samsung Lions over the weekend, the Bears - now only 3.5 games behind - have a shot at reclaiming the lead.

The Bears had an impressive final week of August, winning five of their six games, with their only loss coming to the KT Wiz on Thursday.

As of Sunday’s game, the Bears have won 77 games and lost 48 games in 2019. They now have 19 games remaining until the end of the regular season, while the Wyverns only have 17 games left.

For the Bears, this week is hugely important, as they are playing against the top-ranked Wyverns, the third-ranked Kiwoom Heroes and the fourth-ranked LG Twins.

The Bears will start their week with a two-game series against the Heroes at home in Jamsil, starting today. The Bears are currently 2.5 games ahead of the Heroes and this season, the two clubs are tied in their head-to-head record at seven wins and seven losses.

Over the past three weeks, the club has slowly been making their way up the leaderboard. After reclaiming their second place spot from the Heroes on Aug. 18, the Bears haven’t let it go.

“The season’s heading to its end,” said Bears manager Kim Tae-hyung. “It’s really important which place the team finishes in.”

In the second half of the season, the Bears have been a threatening team, picking up 20 wins and eight losses with a 0.714 winning percentage. The Bears are well ahead in winning percentage - the Heroes are second with 0.567 and the Wyverns are third with 0.548.

Led by Josh Lindblom, the Bears seem to have got back to its pace with the starters. While Lindblom continues to dominate the league with a 2.57 ERA for the month of August, Seth Frankoff seems to have finally recovered from an injury, as he picked up three wins and a loss in the five games he started in, reaching a 2.35 ERA. Lee Yong-chan also seems to have gotten back on track with a 2.82 ERA in August.

In addition to their starting pitchers, the biggest improvement the Bears have made is in batting. In the second half of the season, the Bears’ team batting average is good enough to be first in the league at 0.302. In the first half of the season, it was 0.269, placing the team fifth.

Making things better, the Bears are expected to add more strength in their lineup. During Sunday’s game against the Lions, outfielder Park Kun-woo made an appearance and the Bears’ cleanup hitter Kim Jae-hwan, who had been sitting out due to a rib injury, is expected to return to the roster on Thursday.

“In the beginning, our team lost its pace as we struggled with batting, but our team’s lineup has gotten better in the second half of the season,” said Bears infielder Kim Jae-ho. “If our starters play well, we believe that we can play well. Rather than catching up to the leader or securing our spot at second, it’s important just to play our game. When we do that, I think that win will come along.”