Over the weekend, the KBO’s two bottom ranked teams - the Hanwha Eagles and the Lotte Giants - made some big decisions. 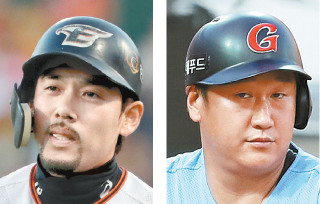 Ahead of their game against the Kiwoom Heroes on Aug. 30, the bottom-ranked Giants announced the exclusion of Lee Dae-ho from their roster, instead calling up 24-year-old infielder Bae Seong-geun to replace him.

Before his demotion, Lee had played in all 122 games for the Giants this season. Although he didn’t initially meet up to high expectations, he’s been slowly making improvements in August, hitting three home runs with a 0.325 batting average.

Despite his previous poor performance, Lee was never excluded from the lineup as they didn’t have a replacement.

Interim manager Kong Pill-sung’s decision to send down the Giants’ most notable veteran possibly means that they hope to rebuild the team in the remaining season. Before Kong excluded Lee, Chae Tae-in was also sent down to the Futures League and Jeon Byeong-woo was called up.

“I thought it is important for the younger players to gain experience and for the coaching staff to check their ability,” Kong said.

However, the Giants’ decision to replace Lee hasn’t been successful so far, as the club lost all three of their games over the weekend.

While the Giants started to release some of its veterans, the Eagles brought back their long forgotten veteran, Lee Yong-kyu.

In March, the Eagles suspended Lee indefinitely over a trade demand. After the 2018 season ended, Lee signed a two-year contract with the option of an additional year with the Eagles for 2.6 billion won. As he signed with the Eagles on Jan. 30, Lee joined the spring camp a day late but successfully completed the training.

However, in the beginning of March, Lee asked manager Han Yong-duk to be traded, a request which was denied. Although an exact reason behind Lee’s request wasn’t announced, there were rumors that Lee asked for the trade because of position change. During spring training, Han said that he planned on assigning Lee as a center fielder and as the ninth batter in the lineup.

For Lee’s continuous requests for a trade, the Eagles suspended him indefinitely for disrupting the team’s environment, right before the season started.

But on Saturday, the Eagles finally lifted Lee’s suspension.

Although he’s no longer suspended, Han said that Lee won’t be playing for the Eagles this season. Han added the club made the decision to lift Lee’s suspension around this time, so he could start preparing for the upcoming season.

“I’ve done something that I shouldn’t have as a team player,” Lee said. “I’m sorry. I’m thankful to the players for accepting me.”

Lee will start training with the Eagles’ development squad starting today at the Eagles’ training center in Seosan.

“I’ve been training by myself and did skills-related training at Daejeon High School,” Lee said. “I didn’t get to play in an actual game for the past five months. Regarding training, I didn’t hear anything other than joining the development squad. I’ll be training accordingly to what the team wants.”