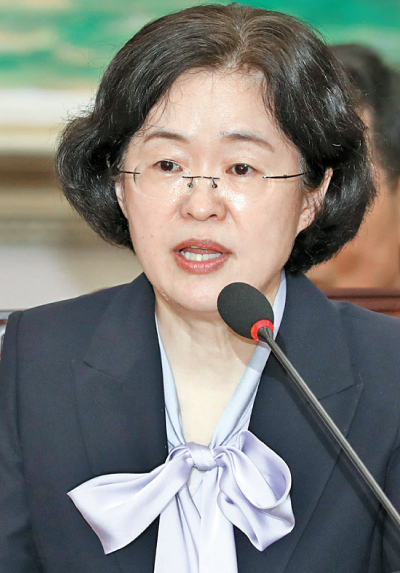 The nominee for the chair of the Fair Trade Commission (FTC) said she will continue to implement the administration’s “fair economy” policy despite recent headwinds challenging local businesses and the economy.

“The fair economy policy will not take steps backwards due to economic difficulties such as the export restrictions by Japan,” Joh Sung-wook said during her confirmation hearing at the National Assembly on Monday.

Under the fair economy policy, the administration has vowed to crack down on business collusion and reform the intricate corporate governance structure at Korea’s large corporations. Critics have argued against the policy amid the recent economic slump, stemming from global uncertainties, including the ongoing U.S.-China trade conflict.

Joh also expressed support for the FTC’s existing plans during the hearing, such as relinquishing some of its exclusive rights.

As part of a broader overhaul to pursue the government policy, the FTC submitted a proposal last year to amend fair trade laws. This includes the organization surrendering its exclusive right to file complaints in major price-rigging cases.

Some critics have argued that the FTC should surrender more of its authority due to concerns about its authority in corporate cases.

The FTC currently has the exclusive right to file complaints for an investigation in all fair trade law cases.

Joh addressed the argument at the hearing, expressing opposition and explaining that the move would create more concerns.

Yoon Seok-youl, the new prosecutor-general, said at his inauguration in July that the prosecution would swiftly act against such violations.

“In order for an indictment, the prosecution needs us to file complaints,” said Joh.