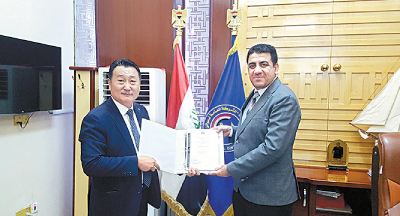 This is the third deal Daewoo has secured in Iraq, following contracts for a container terminal and breakwaters in the Basra Governorate landed earlier this year.

Under the latest contract, placed by the state-owned General Company for Ports of Iraq, Daewoo will build new roads of 14.6 kilometers (9 miles) as part of the Al-far Grand Port project. The construction period is set for 19 months.

Aziz Hashim, director general of the General Company for Ports of Iraq, and Daewoo’s Park Chul-ho signed the deal on Thursday in Basra Governorate, Iraq.

The Al-far Grand Port project is part of Iraq’s attempt to rebuild infrastructure following a three-year war against the Islamic State that ended in late 2017. It’s aiming to develop Al-far’s port into one of the world’s top 12 ports by planning roads that connect to Turkey and other neighboring countries.

“The recent road deal is about constructing the basic infrastructure for Al-far’s port, where Daewoo is already working,” said a company spokesman. “We expect to secure more deals that use similar construction methods in the future, like underwater tunnels and terminals.”

Daewoo plans to actively take part in other bids in Iraq for the country’s reconstruction. In the recent bid for Al-far’s roads, the Korean government offered support, including the Korean embassy in Iraq.

The company is eyeing the market for offshore LNG liquefaction plants for the second half of 2019.

“Daewoo already has globally acknowledged construction know-how in the field - we’re currently focusing sales activities on markets like Nigeria and the Republic of Mozambique,” the company said.