Hyundai Motor’s Kona Electric is parked for charging at a charging station on Jeju Island late last month. The provincial government has been promoting the use of electric cars by tourists and residents in hopes of becoming a “carbon-free island” by 2030. [KO JUN-TAE]

JEJU ISLAND - Jeju was to be a paradise for electric cars.

The central government picked the island, which is also a self-governing province, as an experimental zone and a test bed for the emerging technology and its future market. The appropriate infrastructure was to be installed to make it a reality.

A significant amount of infrastructure has indeed been built. The island, which is 75 kilometers (47 miles) from one end to the other, had more than 14,000 EV charging stations as of May this year, a five-fold increase from the end of 2015.

A grand vision of a bright electric future has been proposed. Jeju wants to be a “carbon-free island” with a target set of more 377,217 EVs and more than 75,000 EV charging stations by 2030.

Jeju also wants to supply all of the electricity for the island using renewable energy sources, like wind power or solar power. 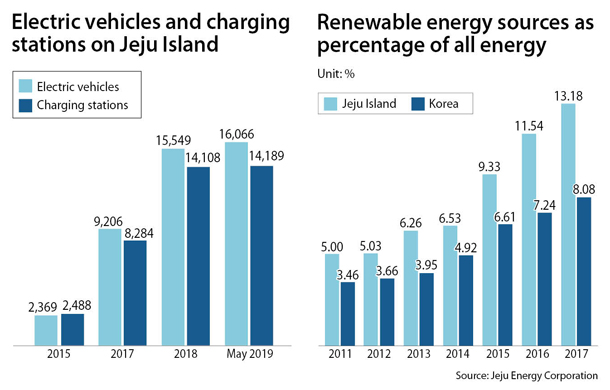 The numbers and ambitions are impressive, but questions remain, not so much around the big picture and larger strategy, but around the mundane realities of charging and maintaining an electric car.

Jeju is hitting its goal in terms of numbers, but it might be missing what really matters for the drivers.

On a three-day trip to Jeju late last month, I was able to see that an electric future is a bit more mundane than we might have imagined.

While driving the Kona Electric from Hyundai Motor around the island that weekend, it was clear that even on Jeju, EV mobility is a challenge.

I was told I could drive 300 kilometers on a charge, but after two hours of tooling around, I only had 170 kilometers of charge left. I could have kept going, but instead I decided to test out the charging stations.

The Kona came through, its infotainment system directing me to nearby charging stations. So I set a course for the nearest, just 2 kilometers away.

“All the electric cars we rent out in Jeju are equipped with a system that helps drivers find the nearest charging stations, so you should have no problem finding one wherever you go,” said a rental car center employee shortly before I took the Kona to the streets.

But that is when it all started to go terribly wrong.

I was able to find the charging stations, but the challenge was to find one free for use. The first four stations had space, but all the cords were taken. At a number of places, non-electric cars were parked.

The one I found on the fifth try was luckily empty, but it was a little frustrating to spend more than 30 minutes just to find an available charging station.

I am not the only one facing such problems. According to a survey last year conducted by the Ministry of Environment, 55.8 percent said they had difficulties in finding nearby charging stations and actually fueling at those places.

A moment later another set of problems arrived, though I had anticipated them.

After going through steps by clicking buttons on a nearly invisible digital screen installed on the high-speed charging station and plugging in the charger to the front of the Kona, a notice was displayed that the Kona would not even be full after 50 minutes of continuous charging.

According to the ministry survey, 46.3 percent of respondents said long charging time caused difficulties in owning and driving electric cars.

Having pulled in with 32 percent of battery power left, it meant that even after almost an hour sitting around and doing nothing, the Kona would only reach 65 percent of capacity, which equates to around 330 kilometers. As a reporter with not much patience, I pulled the plug after about 25 minutes into charging.

Even worse, rain started to fall immediately before I stepped out of the Kona to start fueling. The station I visited had nothing to protect me from the rain, and I had to hurriedly start charging and run to a nearby building. It all seemed rather dangerous to me.

The price level was comforting, however. Even after adding 15 percent to the battery, the system said that I only needed to pay 2,200 won. Price is why many prospective car buyers turn to EVs as their next option.

In a survey by the EV Trend Korea 2019, 49 percent of 508 respondents said they considered buying an EV due to competitive prices, followed by 19 percent who found tax discounts and government support funds attractive.

The Ministry of Environment offers ownership cards that allow for discounted charging.

As the competitive fueling price level becomes a huge advantage for drivers as diesel and gasoline prices rise, fights among EV users for parking and charging lots are expected to be fiercer moving forward.

The Ministry of SMEs and Start-ups in July this year designated seven regions as regulation-free zones to develop additional infrastructure for EV usage. The Ministry of Environment also announced last year that it will install additional fueling stations near public buildings while increasing the proportion of high-speed chargers.

Start-ups have also joined the movement to create a sustainable, convenient EV ecosystem, as the global market for electric cars is going to become larger.