[N.American Box Office] Disney dominates the summer, and its might is only growing

[N.American Box Office] Disney dominates the summer, and its might is only growing

Never before has one studio so dominated summer at the movies. Walt Disney accounted for about half of all ticket sales in U.S. and Canadian theaters during the season, which came to a close Sunday with the Gerard Butler action thriller “Angel Has Fallen” topping the box office for the second weekend.

Summer ticket sales finished 2 percent behind last year, according to data firm Comscore, a slight downturn that came despite an unprecedented display by Disney. 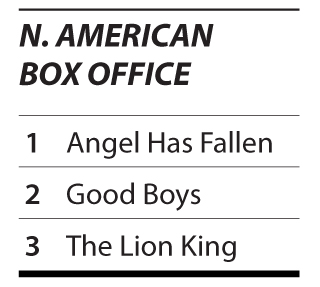 The studio’s approximate $2.2 billion in domestic summer box office sales is greater than that of all the major studios combined.

Summer, which for Hollywood runs from the first weekend in May to Labor Day, traditionally ends with a whimper as few new releases seek to draw audiences over the holiday weekend. That was especially true this weekend as nothing new dented the top 10. Lionsgate’s “Angel Has Fallen” came on top again with an estimated $11.6 million.

The final numbers on Hollywood’s summer didn’t add up to the box-office bonanza that some predicted. Instead, the main storyline on the summer came to be the yawning gap between Disney and the rest of the industry. Disney finalized its $71-billion acquisition of 20th Century Fox in March, but it was the studio’s own offerings that propelled its market dominance.

The only non-Disney film in the summer’s top four was Sony’s “Spider-Man: Far From Home,” and that film was produced by Disney’s Marvel Studios.

Disney has been the market leader for the last four years in Hollywood as its high-priced acquisitions - Lucasfilm, Pixar, Marvel and now Fox - have given the studio the intellectual property firepower for a movie world increasingly focused on franchises.

Disney’s success has been a welcome dose of reliability for theater owners in need of sure hits amid widespread anxiety over the rise of streaming, but it has prompted fears of cultural monopoly.

“For the industry, I think it’s a point of stress, to put it mildly. Other studios are now strategizing around Disney. That’s what you have to do,” said Paul Dergarabedian, senior media analyst for Comscore.

“But lest we think Disney was the only game in town, there were other studios that found opportunities within the calendar.”

Lionsgate was among those that eked out some breathing room. Along with its August successes (“Angel Has Fallen” and “Scary Stories to Tell in the Dark”), the studio’s “John Wick: Chapter 3 - Parabellum” was, with $170.9 million, one of the summer’s biggest successes.

“For me it’s important to dispel that audiences are only going to see Marvel and Pixar and the big tentpole,” said David Spitz, president of domestic distribution for Lionsgate.

“Movies like ‘Scary Stories’ and ‘Good Boys’ and ‘Angel Has Fallen’ prove that there is an audience for that. ‘Good Boys’ was very encouraging because prior to that it was: ‘Comedies are dead. They’re just for streaming.’ And that’s not the case.”