Korea and Thailand to team up on industry 4.0

Korea and Thailand to team up on industry 4.0 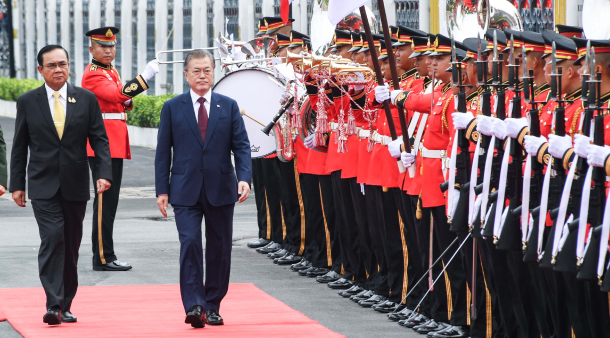 Korea and Thailand agreed Monday to team up to cope with the fourth industrial revolution, expanding their time-honored ties to high-tech sectors.

They also signed an accord on exchanging and protecting military intelligence, as President Moon Jae-in and Prime Minister Prayut Chan-o-cha had summit talks at the Government House of Thailand, also known as Thai Ku Fa, in Bangkok.

“In today’s talks, Prime Minister Prayut and I agreed to further deepen the ‘strategic partnership’ [between the two nations] and open a future together of peace, co-existence and co-prosperity in East Asia,” Moon said in a statement.

First, he added, the two sides will strengthen cooperation on new industries, such as bio, robotics and future cars.

The Moon administration is seeking synergy between its innovative growth drive and Bangkok’s “Thailand 4.0” initiative.

He said Korea and Thailand will work together in science fields, including the development of light source accelerators, research-purpose reactors and science satellites.

“In particular, [I] hope that Korea, which has become the third nation to develop the fourth-generation light source accelerator, will participate in Thailand’s accelerator project,” Moon said.

Thailand, he stressed, is one of the most important partners for his government’s New Southern Policy intended to strengthen and broaden partnerships with Southeast Asian nations and India.

Moon said Thailand is South Korea’s traditional friend, having dispatched thousands of troops to help fight against North Korea during the Korean War (1950-53).

Shortly after the outbreak of the war, Thailand sent a total of 6,326 service members.

Among them, 129 were killed in action and five others went missing, with 1,139 wounded, according to official data.

Speaking at the start of his summit with Moon, the prime minister also noted that Thailand’s relations with Korea have expanded to various sectors, including education, investment and technology.

He said he has enjoyed watching a Korean drama, titled “Descendants of the Sun,” which features a love story between a Special Forces soldier and a female doctor.

More than 400 Korean firms are doing business in Thailand, the second-largest economy in Southeast Asia after Indonesia.

In addition to such people-to-people exchanges, Prayut said, the two sides have great potential for economic cooperation.

“President Moon’s trip this time is a very good opportunity,” he added.

On the occasion of the summit, Korea and Thailand also signed five other memorandums of understanding on industry 4.0, smart cities, Korean-language education, water development and railways.

He’s also the first foreign leader to travel to Thailand since the launch of the Prayut administration in July.