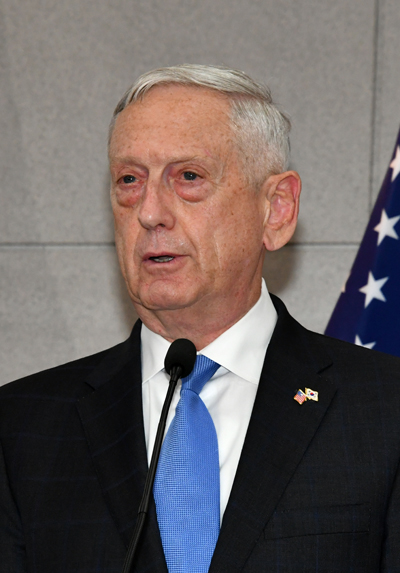 A series of remarks from former U.S. Defense Secretary James Mattis unleashed a wave of thinly veiled criticism of his old boss, President Donald Trump, raising concerns about the latter’s treatment of U.S. allies amid possible “war on the Korean Peninsula.”

Mattis, whose memoir “Call Sign Chaos” is set for release in the United States on Tuesday, broke months of silence since he quit his job as Pentagon chief in December last year to make known his discontent with Trump over a series of foreign policy issues the two collided over throughout his tenure.

Chief among his qualms with the president was Trump’s treatment of U.S. allies in NATO and Asia, Mattis told NPR on Thursday, and when he was convinced he could no longer sway the president on that issue he knew it was time to resign.

“Alone, America cannot protect our people and our economy,” Mattis wrote in an editorial for the Wall Street Journal on Wednesday. “A leader must display strategic acumen that incorporates respect for those nations that have stood with us when trouble loomed.”

Yet Mattis justified the reasons behind his refusal to clash openly with Trump during his term as defense secretary.

“I may not like a commander in chief one fricking bit, but our system puts the commander in chief there, and to further weaken him when we’re up against real threats - I mean, we could be at war on the Korean peninsula,” he told The Atlantic in an interview released on Thursday.

In his much-publicized resignation letter submitted to Trump before leaving office, Mattis stressed that while the United States “should not be the policeman of the world,” it cannot protect its interests and maintain order in the free world “without maintaining strong alliances and showing respect to those allies.”

At the time - and ever since - Trump has strained relations with U.S. allies in both Asia and Europe notably by vocally lashing out against what he called an insufficient financial contribution for U.S. military protection.

However, to the United States’ traditional adversaries, like Russia or North Korea, the president has repeatedly offered conciliation, if not glowing praise in ways that have startled apologists of the U.S.-led world order. Just last month, before meeting Washington’s allies at the Group of 7 summit in France, Trump told a crowd at a factory in Pennsylvania that “our allies take advantage of us far greater than our enemies.”

Nowhere has this strain been more apparent than in South Korea. Washington and Seoul plan to open talks over burden-sharing on the upkeep of U.S. troops on the peninsula within a few months, in which it is widely expected that U.S. negotiators will try to echo Trump’s demand to raise South Korea’s current contribution of $860 million to around $5 billion.

Seoul’s decision to end its intelligence sharing pact with Japan as part of an ongoing bilateral diplomatic dispute and its most recent announcement that it will speed up the relocation of U.S. bases in Seoul to a regional site in Pyeongtaek, Gyeonggi, have been understood as a form of pushback toward the Trump administration not least because the president has been skeptical about the future of U.S. military commitment to South Korea’s defense.

While he was secretary of defense, Mattis stressed the United States’ alliance with South Korea was “ironclad” and tried to reassure Seoul by keeping a low profile on cost sharing issues.