The Korean Olympic committee on Monday came up with its own proposals for reforms in response to a recent call by the government to split up the organization. 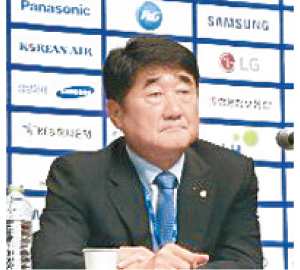 KSOC immediately bristled at the suggestion, saying it was “extremely undemocratic” for the Sports Innovation Committee to push ahead with the move unilaterally without prior consultation with relevant parties.

KSOC also said the government committee’s proposal would be “a laughing stock” in international sports because it runs counter to the IOC’s Olympic Charter, which ensures independence and autonomy for all NOCs from their governments.

The Sports Innovation Committee, formed in February in light of sexual and physical assault scandals in Korean sports, also criticized KSOC for failing to act as a responsible organization amid these incidents, despite receiving substantial funding from the government and public sector.

“When it comes to splitting KSOC, I believe opinions of those working in the field are really important,” Kim said. “I hope the Sports Ministry will listen to different opinions and make a logical choice.”

Kim noted that with a series of key events on the horizon for Korea, this isn’t the right time to push for restructuring of KSOC.

Seoul will host the general assembly of the Association of National Olympic Committees (ANOC) in November 2020. South Korea is also bidding to co-host the 2032 Summer Olympics with North Korea. KSOC recently unveiled a plan to push for a joint Korean hosting of the 2024 Winter Youth Olympics, which it believes would act as a bridge to the 2032 Summer Games on the peninsula.

KSOC President Lee Kee-heung was supposed to hold the press conference, but because of a scheduling conflict, Kim and Jincheon training center director Shin Chi-yong met with the media instead.

Shin said KSOC will also seek changes to the training system for national team athletes so that they won’t be required to stay at Jincheon’s dormitory year-round and will instead be called in for training camps in short stretches.

But Shin said he will withhold any possible changes to beyond next year’s Tokyo Olympics.

“It’s not easy to modify the system with the Olympics less than a year away, and the Sports Innovation Committee may have different ideas,” Shin said. “Hopefully, we’ll be able to move in the right direction after the Olympics.”

The history of KSOC, which dates back to 1920, is dotted by a series of mergers and divisions. KSOC got its current name in 2016 after the Korean Olympic Committee merged with the Korea Council of Sport for All, which had managed daily and recreational sports policies.