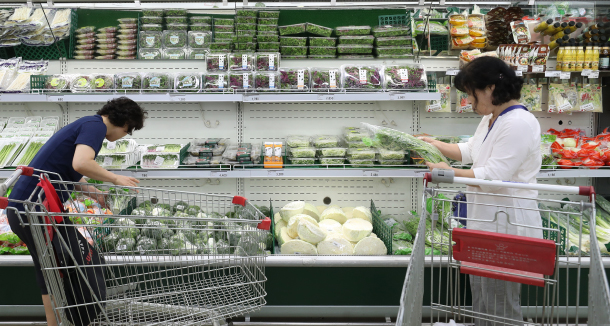 Shoppers pick out vegetables at a store in Seoul on Tuesday. Korea’s inflation rate remained unchanged last month for the first time ever due to a steep drop in prices for agricultural goods. [YONHAP]

SEJONG - Korea’s inflation hit zero for the first time ever, heightening concerns of deflation as the economy struggles.

Statistics Korea reported Tuesday that the consumer price index remained at the same level last month as the previous August - the first such result since data started being recorded in its current form in 1965. The 0.0 percent on-year inflation rate last month was a record low. The previous record was 0.2 percent in February 1999, when the country was in the depth of the Asian Financial Crisis.

In fact, the index did not remain flat but fell, from 104.85 August last year to 104.81 last month, an on-year decline of 0.038 percent. The agency explained that official figures are rounded to the first decimal place.

This year, Korea’s monthly inflation rate has hovered below 1 percent in a range between 0.4 percent and 0.8 percent.

The government also cited other factors such as a fall in global crude oil prices and government policies, such as temporary discounts on fuel prices. 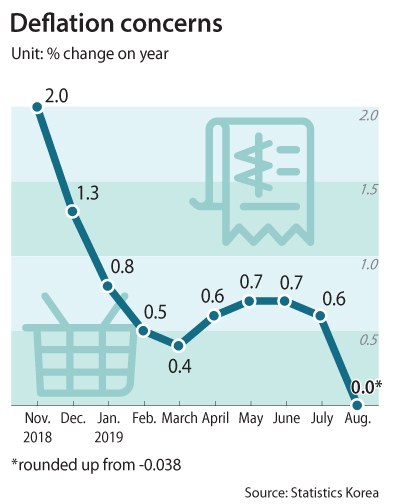 According to the Ministry of Economy and Finance, the price of a barrel of crude oil was $59 last month compared to $73 last year.

The core consumer price index, which leaves out seasonal factors such as agricultural and petroleum prices, only rose 0.9 percent last month from the previous year.

The drop in consumer prices was in line with other sets of worrying economic data.

The central bank reported Tuesday that the country’s GDP deflator - a measure of price levels of all domestic goods - recorded a fall of 0.7 percent in the second quarter this year, the third consecutive quarter of declines.

It also revised the country’s on-quarter economic growth for the second quarter down 0.1 percentage points to 1 percent.

The fall in consumer prices indicates slowing domestic demand, raising the specter of deflation - a continuous decline in overall price levels for goods and services.

Private think tanks have warned of that possibility with the Hyundai Research Institute describing the low inflation situation since May as “quasi-deflation.”

“Korea already seems to be experiencing deflation,” said Sung Tae-yoon, an economics professor at Yonsei University. “Considering the declines to the GDP deflator and consumer prices, we face a difficult situation. The central bank will be pressured to lower the benchmark interest rate.”

The government dismissed those concerns.

“Korea’s low inflation situation seems to be influenced by supply factors rather than demand,” said Kim Yong-beom, vice minister of economy and finance during a meeting about the economic situation. “This is not deflation.”