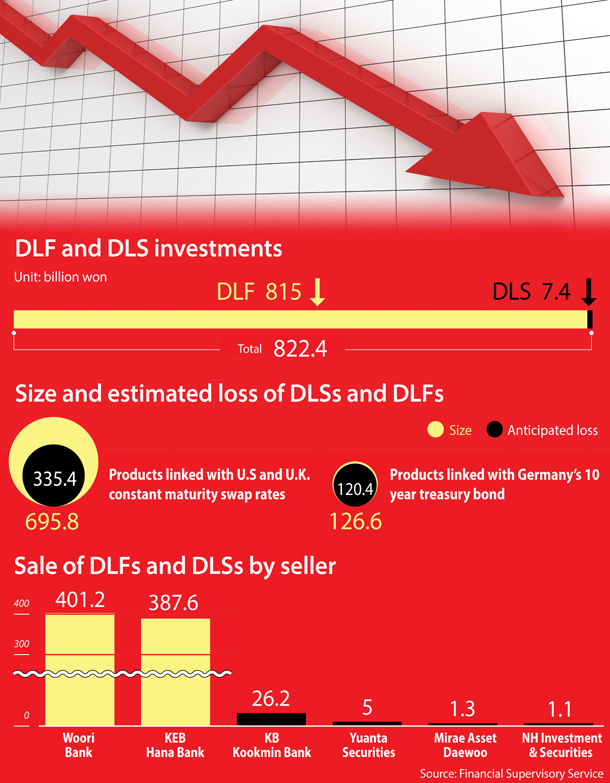 The acronyms DLS and DLF have been plastered across Korean media over the last month or so. They may look like elusive codenames, but these letters actually stand for complex investment products that have left a lot of elderly Koreans at risk.

Derivative-linked securities (DLS) and derivative-linked funds (DLF) are currently at the center of a controversy as the financial products bleed losses worth over 400 billion won ($329 million).

The fact that a large number of elderly people are subscribed to the high-risk, relatively complex investment products raises doubts over whether financial institutions fully informed their clients of the risk involved.

The fiasco also sparked a discussion over whether banks should be entitled to sell the high-risk investment products at all, revealing the vague standards to determine mis-selling.

Here’s the basics on what the investment products in question are, why they are so contentious and the impact that the current controversy has had on Korea’s financial sector.

Q.What actually are DLS and DLF?

Firstly, let’s deal with derivatives. Derivatives are contracts with a value derived from the value of an underlying asset or group of assets, such as bonds, stocks, commodities and interest rates. Derivatives are therefore worthless in their own right, with their entire value dependent on the underlying product.

The loss or gain of a derivative is solely determined by the ups and downs of the linked assets, but crucially, the original investment - the principal - is not protected. This makes the product relatively risky compared to more common products with a guaranteed principal.

In this sense, DLSs, which are often sold at brokerages, are financial products structured to trail the performance of underlying assets while DLFs are investment funds that track and invest in one or more DLS products and can be sold at commercial banks.

The DLSs and DLFs in question track the interest rates of 10-year German treasury bonds, the seven-year British pound constant maturity swap (CMS) rate and the five-year U.S. dollar CMS rate. A CMS rate is a variant on the interest rate swap rate designed to be less volatile.

As high-risk investments, these derivatives can offer relatively high rewards, which is what attracted investors in the first place. When the interest rates of the tied assets stay within a predetermined margin until maturity, the products typically guarantee an annual return rate of between 3.5 and 4 percent. But if the rate falls outside of that margin, investors could lose more, if not all, of their money.

With interest rates especially low at the moment, derivative-linked products grew in popularity because of the relatively high return. Financial institutions issued a total of 48.4 trillion won worth of DLSs and equity linked securities in 2016, but the figure jumped up to 80.3 trillion won in 2017 and 82.6 trillion won in 2018, according to the Korea Financial Investment Association.

When an investor invests in a company or fund, they are able - to some extent - to look at the company’s output and decide whether they think it’s going to do well or not. Of course, there are always unforeseen factors, but generally these decisions are made with some level of insight informing the investment.

The problem with these derivative-linked investments is that they are pegged to the economies of entire countries, and therefore at risk from global economic issues. This makes the number of unforeseen factors that could affect the investment almost impossibly large. Essentially, any uncertainties affecting major economies around the world, and those Korean investors are suddenly at risk.

And of course, that’s exactly what has happened over the last few months.

Ever since major economies around the world began lowering benchmark interest rates to stave off an economic slowdown, the DLFs and DLSs betting on higher interest rates have started generating huge losses.

The Financial Supervisory Service (FSS), Korea’s financial watchdog, said that 3,654 individual investors and 188 businesses have bought 822.4 billion won worth of derivative-linked products as of Aug. 7.

The FSS estimated that the combined losses could amount to 455.8 billion won if the assets’ interest rates stay at the current level.

Alongside the sheer size of the expected losses, the high proportion of older people enrolled in the investments casts doubts over whether financial institutions made their clients fully aware that they were putting their principal investment at risk.

In sorting out the age of DLF investors, Rep. Kim Byung-wook of the ruling Democratic Party found that people aged over 50 account for nearly 70 percent. DLFs are responsible for the bulk of investments, at 815 billion won, while DLS account for just 7.4 billion won.

Since the DLFs were sold at major banks like Woori Bank and KEB Hana Bank, rather than dedicated investment brokerages, some question whether it is appropriate for banks to sell high-risk, high-yield derivative products.

Financial authorities launched an investigation into Woori Bank and KEB Hana Bank last month for possibly misleading investors when selling DLFs. The two banks became the major targets because they have sold the most products.

The regulator also took aim at asset managers and securities firms involved in structuring and selling DLSs. They include IBK Securities and KB Asset Management. The FSS will also handle a total of 29 complaints filed by affected investors.

Q.Is there any evidence that the banks actually mis-sold the products?

For now, only anecdotal evidence from media reports exists. The sources, reportedly investors, accused the financial institutions of inadequately explaining the potential loss to their principal. They also said that the banks played down the possibility of losing money by overtly emphasizing the safety of the German treasury bond.

Q.Has there ever been a similar incident?

The case is reminiscent of a scandal involving knock-in, knock-out (KIKO) option contracts sold to small- and medium-sized companies (SMEs).

Under the contracts, mostly sold between 2007 and 2008, exporters agreed to sell dollar earnings to banks at a flat rate in the future. If the won strengthens against the dollar, the SMEs would benefit, as they’d be able to get more won for their dollar than the actual exchange rate. But if the dollar strengthened against the won, the SMEs would miss out on potential profit.

More than 700 SMEs signed up for the contracts when the dollar was weakening against the won.

However, as Korea was hit by the global financial meltdown in late 2008, the dollar’s value shot up against the won. That led to massive financial losses for subscribers who were mostly SMEs heavily dependent on exports. The firms accused banks of falsely structuring the contracts and misinforming them.

The Supreme Court, however, ruled in favor of banks in 2013. Still, the financial authorities say that the affected firms are eligible for compensation, but any details including compensation rates have yet to be determined.

Q.What is the impact of this case?

Just as many companies avoid currency-related contracts after the KIKO scandal, investors are turning away from high-risk investment including DLS and even equity-linked options.

After the news of the DLSs and DLFs losses broke, NH Investment & Securities attempted to sell a DLS product with the aim of raising more than 10 billion won, but not one investor signed up. Hana Financial Investment faced the same fate when it sold an equity-linked security on Aug. 14.

The case could translate into tougher regulations or even an outright ban on the sale of derivative-linked products by commercial banks.

Eun Sung-soo, the incoming chair of the Financial Services Commission, said that the selling of such derivative-linked products is something that needs to be discussed further.