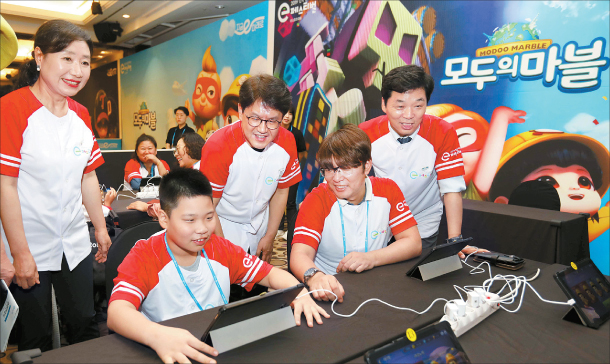 On Tuesday afternoon, three teenagers were coding on a digital tablet to make a palm-sized robot swiftly move through a maze filled with obstacles and walls, their eyes constantly flicking between the tablet and the maze as they quickly adjusted the robot’s instructions.

“We have nine people competing today - their task was to find the most efficient code to help the robots reach their goal while completing tasks like moving certain blocks and avoiding others,” explained an employee that oversaw the contest at K Hotel Seoul in Yangjae, southern Seoul.

This competition was just one of the many events at the National eFestival Competitions for Students with Disabilities, an annual event that celebrated its 11th anniversary this year. The festival is jointly hosted by gaming company Netmarble, the Korea Creative Content Agency and the National Institute of Special Education.

The two-day festival that began on Tuesday sees 1,500 students from elementary to high school with disabilities come together to compete in various events. All of the competitors have already won regional tournaments in respective fields held between May and July in order to attend the main competition in Seoul.

A team from Daegu that competed in Netmarble’s PC baseball game Magu Magu said they have been practicing since May.

“This is my third year as a contestant - before that I came as a visitor,” said Ahn Seong-sook, a 17-year-old competitor from Daegu Seongbo School of Special Education.

Ahn, who also plays wheelchair tennis, said she practiced Magu Magu to compete in the national tournament, despite being a League of Legends enthusiast in her free time.

“I’ll be in my final year in high school next year so this will be my last time competing. But it’s fine. I have no regrets,” she added.

The festival will include tournaments for a total of 11 games, including mobile game Modoo Marble, Starcraft, the PC-version of Othello and Xbox’s Kinect Sports that uses a 3-D camera to detect movement in a race.

Much like the Paralympics, each event is designed for competitors with specific disabilities.

In the Starcraft tournament, for example, contestants have to compete in a team of two in which one student has a developmental disability.

Apart from games, the annual event also holds competitions for 16 pieces of software including Microsoft Excel and Word. This year, the competition for special education students in middle and high school was upgraded from excel to software coding.

“The kids are doing better than we thought. We’re seeing contestants that finished their tasks earlier than expected,” said Eom Young-sik, a member of the eFestival’s organization committee and a special educations teacher at Kyungpook National University Middle School in Daegu.

Finalists will receive awards issued by the ministers of education and culture and the prime minister.

“The eFestival was first devised to develop a healthy pastime and resolve the information gap for our students - now it’s become one of the largest events for students with disabilities,” said Seo Jang-won, who heads the Netmarble Cultural Foundation. “We’ll make our best efforts to continue the festival to help our students dream without being stopped by physical or social difficulties.”