LG’s 8K TV is heading to Europe and the U.S.

LG’s 8K TV is heading to Europe and the U.S. 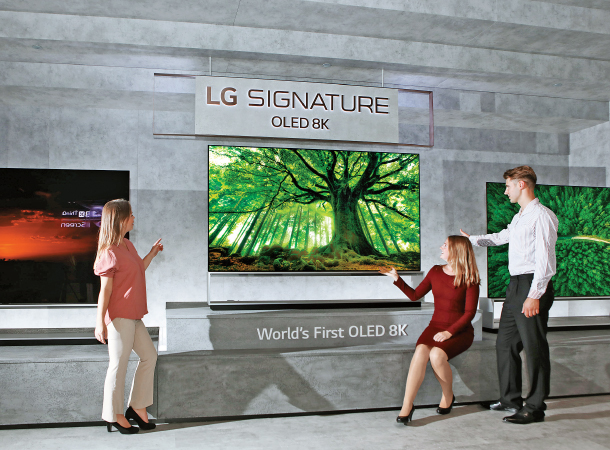 Models introduce the 88-inch LG Signature OLED 8K TV ahead of the IFA 2019, which will be held in Berlin from Sept 6 to 11. [LG Electronics]

LG Electronics will launch its 8K organic light-emitting diode (OLED) televisions in the United States and Europe this month in a bid to bolster its presence in the global premium TV market, the company said Tuesday.

Beginning this month, the TV will also be launched in 10 overseas markets including Germany, Britain, France and the United States, the company said.

With 33 million pixels, the 8K resolution screen comes with four times the number of pixels of a 4K screen and 16 times that of a full HD screen.

The electronics giant said its 8K TV is equipped with an artificial intelligence processor chip that enables the TV to optimize video and sound quality.

Even lower-end video can be aired close to the quality of 8K videos with the chip, according to LG.

In select markets the TVs will offer built-in versions of the Google Assistant and Amazon Alexa, providing voice control.

The TV will be on display at the upcoming IFA 2019, Europe’s largest electronics show to be held from Sept. 6 through Sept. 11 in Berlin, Germany.