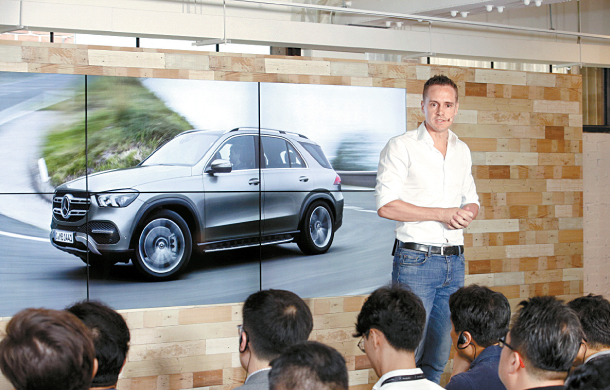 It is the first Mercedes car introduced in Korea that comes with the company’s own infotainment system, dubbed the Mercedes-Benz User Experience (MBUX). It has touchscreen displays as well as voice-operated controls.

While MBUX is a global system developed by the headquarters, it has been adapted to meet the local requirements, according to Mark Raine, vice president of product and marketing of Mercedes-Benz Korea during a press event held Tuesday in Seoul.

“Because we’ve got a local research and development department here in Korea, they adapted it in order to customize it in terms of voice commands, map and navigation material,” Raine said, adding its latest SUV can be best described as a luxury meeting technology and performance in an SUV.

The MBUX can be activated either by calling out “Hey Mercedes” in English or “Annyeong Benz” in Korean.

The car comes in two powertrain options - gasoline and diesel.

The gasoline version, the GLE 450 4MATIC, offers maximum output of 367 horsepower and 51 kilogram-meters of torque.

The diesel version, the GLE 300 d 4 MATIC, offers maximum output of 245 horsepower and 51 kilogram-meter torque. The model is priced at 90.3 million won.

On the question whether the diesel version aligns with all the environmental requirements of the local market, Raine said the engine has been “thoroughly tested in Germany and Korea here to meet all the high demands of the Korean market in terms of efficiency but also fuel consumption.”

The company said more variations will be added in the GLE lineup including a version with a high-performance AMG label in the future.