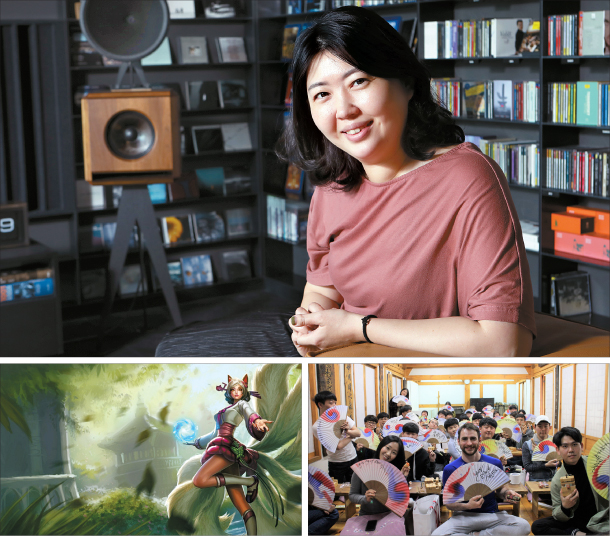 Top: Karen Koo, senior PR manager of Riot Games. Above left: League of Legends’ 89th champion Ahri in its hanbok (traditional Korean clothes) skin that was created to mark the launch of the Korean server in 2011. Above right: Riot Games organizes various programs for its players every year to introduce them to the cultural heritage of Korea. [PARK SANG-MOON, Riot Games]

Korean players of computer game League of Legends say they feel less guilty spending money on buying items for the game because they know that part of their money goes to preserving and utilizing Korean cultural properties as well as restituting valuable artifacts located overseas that may never return home.

Although it’s difficult to see how the U.S. video game publisher and Korean cultural artifacts are related, Riot Games has been a major financer of the country’s projects of restituting cultural properties that were looted during the Japanese colonization (1910-45) and the Korean War (1950-53).

So far, the foreign firm has financed the restitution of five Korean cultural properties, including the Shakyamuni Triad painting; six sets of a royal bamboo investure that were given to Queen Sinjeong (1808-90) when she married Crown Prince Hyomyeong of Joseon Dynasty (1392-1910); Independence activist Cheokam Kim Do-hwa’s woodblock; a rectangular white porcelain of the 19th century with writing titled “Yidonggung”; and the royal seal of Junghwagung.

Ever since the company established a regional office in Korea and launched a Korean server in December 2011, Riot Games has expressed its determination to contribute to Korea, as it is the country with the most number of players of their game.

“When we held a press conference for the Korean launch in September 2011, the head of the Korean office at the time publicly declared that Riot Games would donate the first six months of the sales proceeds made from selling Ahri - the new champion that was introduced for the Korean launch - to Korean society,” said Karen Koo, the PR manager of the company. “Because players usually buy champions when they come out, the sales from the first six months are almost all of the profits the company can make from the character.”

Riot Games kept its promise and accumulated about 500 million won ($411,399.50). Then the question was where to spend the money. That’s when Koo joined in.

“I joined the company in early 2012 and on the first day, I was asked to come up with ideas for our Corporate Social Responsibility (CSR),” said Koo. Since then, Koo says all she thought about was “what would be a meaningful contribution to Korean society that is very Riot-like?”

“Riot Games, in some sense, is similar to other game publishers, but also quite different because we are very player-oriented,” said Koo. “It’s our number one philosophy to interact with the players and follow their voices.”

Therefore, it was important for Koo to find something that Korean League of Legends players could participate in and sympathize with.

Why sponsor Korean heritage-related programs when most of the players are teenagers and young Koreans in their 20s - the age groups that are the least interested in history and artifacts?

Koo says that nobody frowns upon the fact that Riot Games supports cultural heritages of Korea, but many do have difficulty understanding as to why, out of so many other options.

“Perhaps it’s because they don’t see any similarities between the two,” said Koo. “But in fact, gaming is a part of culture. And the roots of culture is in our cultural heritages.”

But that’s not exactly how this all began.

The idea first came to Koo through Ahri, the 89th champion Riot Games created and released in line with the launch of the Korean server. Riot Games is hailed for its excellent localization. To celebrate the Korean launch, Riot Games gave birth to Ahri - the character that is inspired by an old Korean folk tale about a nine-tailed fox that possesses impeccable beauty when in human form but is in fact a demon that seduces men in order to take over their lives. To give Ahri a Korean look, the company also created a skin that feature hanbok (traditional Korean clothes). To develop the character and the hanbok skin, Koo says the company had to dig into old documents and research Korean heritage.

“The more we studied about Korean heritage, the more we realized how beautiful and interesting it is. There are so many stories and so much history behind [the artifacts],” said Koo. “That moment, I thought it would be so great if we could act as a channel to introduce cultural heritages to the younger generation of Koreans who are our major consumers.”

According to Koo, these young users are very enthusiastic in writing reviews, reading about things related to the League of Legends and communicating online to talk about the game. If these users could get to know about the cultural properties of Korea and get interested in them through Riot Games, Koo believed it would be a worthwhile and positive experience.

Instantly, Koo picked up the phone and called various organizations including the Cultural Heritage Administration (CHA). Although the company approached the administration with bundles of cash, CHA was hesitant to receive the donation.

“The officials at the administration had never heard of Riot Games nor understood why the foreign company wanted to donate money to help Korean cultural properties,” said Koo. “They also had to find common ground between Riot Games and CHA, and also make sure if the company wasn’t merely donating money for media attention.”

To learn more about Riot Games’ activities with the administration, the Korea JoongAng Daily recently sat down with Koo at the company’s Korea office in Gangnam district, southern Seoul, for an interview. 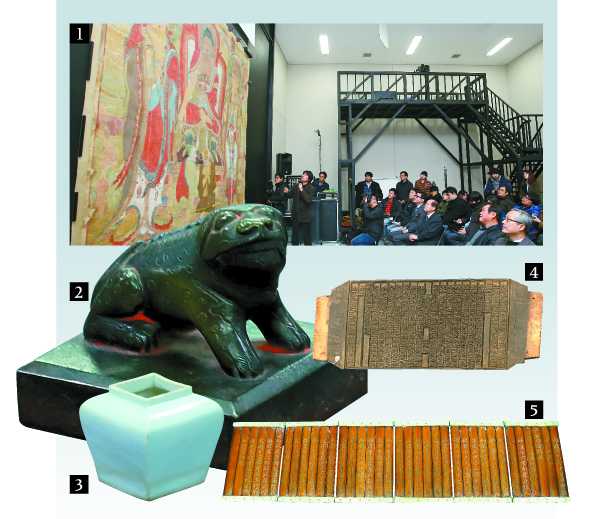 Q. It sounds like it was not easy to persuade the CHA officials when they found out that Riot Games was donating money. How did you persuade them in the end?

A. I made series of phone calls and the official in charge of public-private cooperation told me that he’d finally come and visit to hear me out. After talking for hours, the official from the CHA admitted that he didn’t know a lot about the game, but it actually seemed very influential to the younger generation of Korea. Moreover, what Riot Games is looking for is not a one-time sponsor event but a long-term partnership. I think CHA really needed a company [like Riot Games] as a sponsor because many of the projects that the administration carries out take time.

Do you mean the number of years it takes for a cultural property found outside the country to be returned to Korea for example?

Right. The first project we did after joining hands with the CHA was restituting the 18th-century Buddhist artwork Shakyamuni Triad in 2013 from the United States. This valuable treasure was being passed around U.S. museums and art markets for nearly 100 years. The Korean officials learned that the painting was left rolled up in a gallery at the Hermitage Museum & Gardens in Norfolk, Va., because of its grand size, and it was deteriorating each day [it sat there]. To bring it back, the officials negotiated with the gallery insisting that they donate the valuable painting in return of a donation of around 300 million won from Riot Games Korea. The painting finally came home and the news made headlines. We jumped with joy and it felt so rewarding. We were proud to be a part of it. But what we didn’t realize then was how lucky we were to be able to restitute the painting in such a short period of time. It took less than a year to bring it home. The second case happened five years later, in 2018.

Of course we have other programs where we spend our CSR budget throughout the year, such as organizing trips to cultural heritage sites, holding education programs, financing restoration projects of deteriorating artifacts like the Joseon Dynasty nobu (flags, weapons and other items used in royal procession) items, as well as creating a three-dimensional database of Korea’s historical buildings like Seoul Munmyo, a Confucian Shrine and Sungkyunkwan, a Confucian education institute, both of which are located in central Seoul.

But quite a large sum goes into saving up for an emergency fund for artifacts that get discovered overseas and need a private corporation’s help to return home. As the company draws up a year’s budget in advance, it is important for private companies to see an output when there’s an input. But funding cultural properties doesn’t work like that. We put aside a certain amount of money for restitution projects each year, but nothing gets returned that year. I realized that is why many private companies hesitate to partner with the CHA, as it is difficult to see immediate outcome. But when it finally happens, the satisfaction and the impact is beyond expression.

Riot Games prioritizes interacting with players. How does the company communicate with Korean players about their CSR projects with CHA?

We are very active in communicating with them about our programs. We announce the projects we’ll carry out within the year through press releases and news reports and also inform them how they are going on through a separate CSR page on our website. We also organize many offline programs that players can participate in, such as group visits to national palaces or even a two-day tour to the historic city of Gyeongju [North Gyeongsang]. I was quite surprised by the participation rate. Many of these programs are held early on Saturday morning and honestly, for gamers, that’s when they go to bed. But they turn up with so many reasons of their own. Some of them even become so close that they get together after the trip and play League of Legends together.

The players I think naturally hear about our contributions because we are consistent. And more and more, I see players being proud of being part of the organization that contributed in preserving and restituting our cultural property.