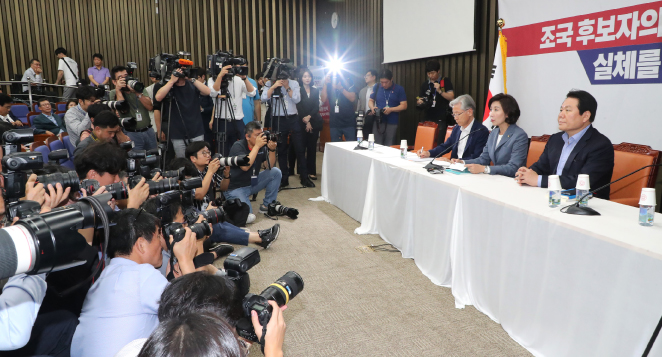 President Moon Jae-in on Tuesday asked the National Assembly to send the confirmation hearing reports for his six nominees to top government posts by Friday, including the embattled justice minister nominee Cho Kuk.

The request was made as the National Assembly failed to submit confirmation hearing reports to the president by the legal deadline of midnight on Monday. The adoption of confirmation hearing reports is a procedural measure for the National Assembly to express agreement to the president’s nominations for minister-level officials.

In August, Moon reshuffled seven minister-level officials, but the National Assembly confirmed only one of them - Minister of Agriculture, Food and Rural Affairs Kim Hyun-soo. Among the rest, confirmation hearings took place for five, but no reports were adopted due to the opposition parties’ protests.

In regards to Cho, the ruling and opposition parties scheduled a two-day session to start on Monday, but no hearing took place as of Tuesday due to the rival parties’ disagreement on a list of witnesses to summon. Instead, Cho and the ruling Democratic Party (DP) held an 11-hour press conference on Monday and took questions from the media which were almost entirely related to allegations surrounding him and his family, ranging from his daughter’s academic fraud to dubious wealth management.

President Moon, who is currently traveling in Southeast Asia, will return to Korea on Friday and make a decision on the appointments, said Yoon Do-han, senior secretary for public communications.

The National Assembly has up to 20 days after a nomination to hold a confirmation hearing and submit a report to the president. If lawmakers fail to do so, the president sets a new deadline within 10 days. If the report still doesn’t come, the president can go ahead and make the appointment without the lawmakers’ blessing.

Friday is the final deadline for a confirmation hearing report to be adopted. The main opposition Liberty Korea Party (LKP) has said it needs at least five days to arrange a confirmation hearing. By law, witnesses must receive subpoenas from the legislature five days before the hearing, meaning with only four days to go, Moon is likely to appoint Cho without a hearing.

Earlier in the morning, Senior Presidential Secretary for Political Affairs Kang Gi-jung said Cho’s press conference on Monday was more than enough to clarify all suspicions surrounding him. “Cho made clear yesterday what were facts and what were suspicions regarding the accusations surrounding himself and his relatives,” Kang said in a radio interview.

The ruling party also agreed Tuesday that Cho’s press conference cleared up suspicions and he is ready to be appointed. Moon is expected to appoint Cho as the new justice minister on Monday and allow him to attend the Cabinet meeting on Tuesday.

The LKP immediately condemned Moon’s decision. “We told them that we need five days [to call witnesses for a confirmation hearing], but they set the deadline for Friday,” Rep. Na Kyung-won, floor leader of the LKP, said Tuesday. “That means the Blue House doesn’t want the hearing.”

“The DP and the Blue House probably wanted to boycott the confirmation hearing from the beginning,” Na said, adding that it is lamentable for Moon to attempt to appoint Cho without the National Assembly’s scrutiny.