Typhoon set to hit Seoul by noon on Saturday

Typhoon set to hit Seoul by noon on Saturday 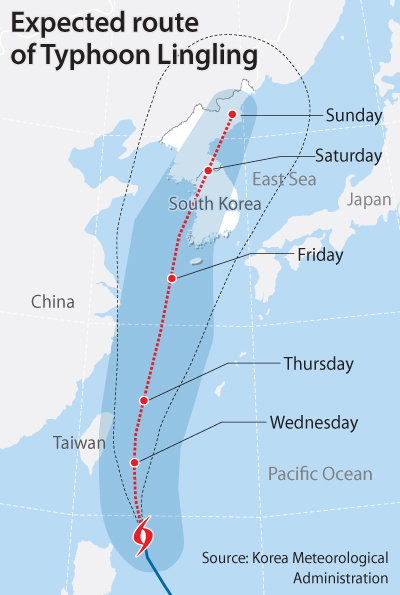 Typhoon Lingling is expected to hit Seoul by noon on Saturday and cause serious damage, according to the Korea Meteorological Administration (KMA).

“The small-sized typhoon is expected to grow as it approaches Korea,” said the weather administration on Tuesday. “It will develop into a medium-sized typhoon by Wednesday night.”

The typhoon, which formed in the sea southeast of Taiwan on Monday, is moving at a speed of 9 kilometers per hour (5.6 miles per hour) toward the Korean Peninsula, the KMA said. Its maximum wind speed was 47 miles per hour as of Tuesday morning.

The typhoon will pass west of Seogwipo on Jeju Island on Friday morning, when its maximum wind speed is expected to be 82.8 miles per hour.

It is expected to move north toward Gunsan, North Jeolla, on Saturday morning, and pass close to Seoul by noontime Saturday. The typhoon is expected to weaken after that and pass near Chongjin in North Hamgyong Province of North Korea on Sunday morning.

If the typhoon does pass near Seoul on Saturday, it will be the first typhoon to do so since Typhoon Gonpas in 2010, which killed six people and injured 11 others. Gonpas passed close to Incheon in September 2010 and caused 176.1 billion won ($144.8 million) of damages, according to the Ministry of the Interior and Safety.

The KMA warned Lingling could cause damage from heavy rain and strong winds, especially to farmlands ahead of the upcoming harvest season.

“The track of the typhoon may change,” said Yoon Gi-han, an official of the KMA. “But that does not change how much damage we expect from the typhoon. It’s a strong typhoon and it will have a strong affect on the country. We need to make preparations before Chuseok, especially in farmlands.”

Chuseok, the Korean harvest holiday, is set for Sept. 12 to 14 this year.

The KMA said it will rain some 30 to 50 millimeters (2 inches) per hour from Wednesday morning to Thursday in the central regions of Korea, including Seoul, Gyeonggi and Gangwon, with some areas expected to receive more than 300 millimeters of rainfall total.