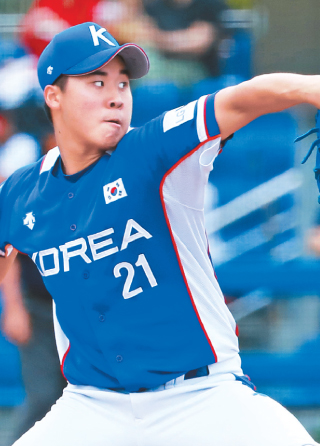 Jang Jae-young throws a pitch during a game against China at the WBSC U-18 Baseball World Cup on Tuesday. [YONHAP]

About 10 major league scouts watched Jang play during the high school championship in July. It was Jang’s return to the mound after three months off following an injury, but he easily tossed pitches over 150 kilometers per hour (95 miles per hour).

Although Jang mainly plays as an infielder, scouts are more interested in seeing him turn professional as a pitcher. He may only be a junior in high school, but Jang can throw a baseball at 153 kilometers per hour.

Surprisingly, this isn’t the first time Jang’s pitching ability has received this much attention. In Korea, he’s been in the spotlight since middle school, when his ability to toss a fastball averaging at around 140 kilometers per hour helped lead his school to three middle school championship titles.

Following his successful middle school career, Jang attended Duksoo High School, a notable school for baseball, and the structured training there allowed him to make another improvement in his performance.

Having already proven what he can do on the mound, Jang is now proving he can pull his weight at bat as well, as he competes for Korea at the World Baseball Softball Confederation (WBSC) U-18 Baseball World Cup in Gijang, Busan.

At this year’s World Cup, Jang and pitcher Lee Seung-hyun are the youngest players on the Korean team, both born in 2002. Despite being the youngest player and a well-established pitcher, Jang has mostly been playing as cleanup hitter and designated hitter.

In addition to Jang’s ability as an all-around player and a future top rookie, he was back in the spotlight on Monday when his father visited Gijang to watch him play. Jang is the son of Jang Jung-seok, manager of the Kiwoom Heroes.

Of course this wasn’t the first time the elder Jang has been seen watching his son play ball - back in July, he took advantage of the KBO’s All-Star break to watch the high school championships.

“I don’t get to see my son play baseball that often,” Jang Jung-seok said.

As well as missing most of his son’s game, the elder Jang also avoids talking about baseball at home.

“My dad doesn’t really talk about baseball that much,” explained Jang Jae-young. “He always told me to be humble.”

As Jang Jae-young is only a junior in high school, it won’t be until October next year that KBO clubs can draft him. He is among the candidates for first pick for the Seoul-based teams: Doosan Bears, LG Twins and the Heroes. As a student in Seoul, the three clubs based in the city get to draft him ahead of the other clubs due to the KBO’s regional advantage regulation.

The Heroes fans already have high hopes that they’ll get to see another Jang join the club in the 2021 season as the Heroes get first pick out of the three clubs in the draft.

But the one variable could be the majors. Last year, the major leagues requested a background check for Jang, although every year a number of players are asked for background checks by the MLB but very few actually head to the United States.